He also co-hosted Star Trek: The Pod Directive with Lower Decks co-star Tawny Newsome, who, along with Eugene Cordero, has been a frequent guest on his comedy podcasts. In 2007, he starred in four episodes of The Sarah Silverman Program with Sarah Silverman. In 2010, he was a guest star on Community, starring Danny Pudi and Gillian Jacobs, in an episode that also featured Tig Notaro. He reunited with Pudi in 2017 for DuckTales. In 2020, he starred in an episode of The Twilight Zone that also featured Tawny Newsome. 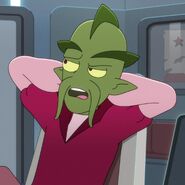