Paul Lambert (1 August 1922 – 27 April 1997; age 74) was an actor who appeared as Melian in the Star Trek: The Next Generation first season episode "When The Bough Breaks", and Howard Clark in the fourth season episode "Devil's Due".

Lambert was born in El Paso, Texas and has served as a lieutenant in the Second World War. His first big on-screen role was in Spartacus in 1960 (with Jean Simmons, Peter Brocco, John Hoyt, Arthur Batanides, William Blackburn, Dick Crockett, Seamon Glass and narration by Vic Perrin). Lambert also played in the 1976 drama All the President's Men, alongside Stephen Collins, F. Murray Abraham, Richard Herd, Nicholas Coster, and Gene Dynarski. He was also a stage actor and occasional director for stage plays.

Lambert passed away in 1997 at the age of 74 in Santa Monica, California. 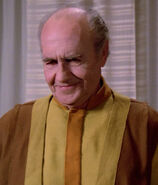 Melian
TNG: "When The Bough Breaks" 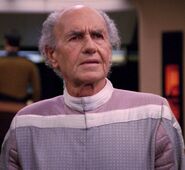 Howard Clark
TNG: "Devil's Due"
Add an image to this gallery

Retrieved from "https://memory-alpha.fandom.com/wiki/Paul_Lambert?oldid=2554674"
Community content is available under CC-BY-NC unless otherwise noted.