Winfield filmed his scenes for "Darmok" between Tuesday 23 July 1991 and Friday 26 July 1991 on Paramount Stage 9, Paramount Stage 16, and on location at Bronson Canyon. For his two day location shooting, he was picked up at home at 2:45 am and 6:45 am and brought to the studio where he received his make up from Michael Westmore, Gerald Quist, and Ed French before he was brought to location.

Winfield appeared in roughly 125 films and television shows. Among the roles for which he is known are his Academy Award-nominated portrayal of a Depression-era Louisiana sharecropper in the 1973 film Sounder and his Emmy Award-nominated performance as Dr. Martin Luther King in the 1978 mini-series King. He is also known for his supporting roles in such films as The Terminator and Mars Attacks! and for narrating the A&E series City Confidential.

Winfield is one of only four Star Trek alumni to have been nominated for the Academy Award in the Best Actor in a Leading Role category. The others were F. Murray Abraham, Frank Langella, and Benedict Cumberbatch; thus far, Abraham is the only one to win the award.

In his afterword in the novelization of Far Beyond the Stars, Steven Barnes noted that Winfield's film characters tended not to survive and that they usually died to protect white characters. Barnes commented: "Poor Paul Winfield actually made a career out of dying in SF movies. Wrath of Khan (protecting William Shatner), Terminator (protecting Linda Hamilton), Serpent and the Rainhow (protecting Bill Pullman) and, most insultingly, in Damnation Alley. Oh, I remember watching that movie. In fact, I'll never forget it".

Winfield was reported as saying in relation to his role of Captain Terrell: "I died so the white man could live". 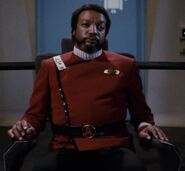 Winfield was the cousin of one-time Star Trek: The Original Series guest star William Marshall. The two appeared together in the 1977 thriller Twilight's Last Gleaming. Marshall passed away in 2003.

Winfield, who battled obesity and diabetes, died of a heart attack in 2004 at the age of 62 in Los Angeles. He is interred at Forest Lawn Memorial Park in the Hollywood Hills with his partner of thirty years, architect Charles Gillan, Jr., who died of bone cancer in 2002.

Winfield received an Academy Award nomination in 1973 for his leading role in the film Sounder, at the time being only the third African-American to be nominated for the award. One of his final acting appearances was a made-for-television remake of this film in 2003. (Actress Janet MacLachlan, from TOS: "The Alternative Factor", also had a role in the original Sounder.)

In 1995, Winfield won his first Emmy Award (his third nomination) for his 1994 guest appearance in an episode of Picket Fences, a series which starred actor Ray Walston, also known as Boothby from TNG and Star Trek: Voyager.

Winfield became known to television audiences for his role as Paul Cameron, Diahann Carroll's love interest, in the NBC sitcom Julia. Winfield played Paul from 1968 through 1970; when he left in the latter year, he was replaced by TOS guest actor Fred Williamson as Steve Bruce. Winfield later worked with Williamson in the 1996 film Original Gangsta.

Prior to being cast in Julia, Winfield guest-starred in such programs as Perry Mason (in an episode with Anthony Caruso and Seamon Glass), The F.B.I. (starring Stephen Brooks), and Mission: Impossible (with Sid Haig). During his run on Julia, he was also seen in such shows as The High Chaparral (starring Henry Darrow) and Mannix (in an episode with Susan Oliver). In addition, he made appearances in two episodes of Ironside, one in 1968 with Gene Lyons and another in 1972.

Winfield made his film debut in the 1969 drama The Lost Man. His second film was 1970's R.P.M., in which he co-starred with Gary Lockwood, Graham Jarvis, and John McLiam. Winfield then appeared in the 1971 film Brother John, directed by James Goldstone.

In 1973, nearly ten years before The Wrath of Khan, Winfield appeared alongside his future co-star William Shatner in the TV movie The Horror at 37,000 Feet. Darleen Carr and France Nuyen also appeared in this production.

Following his Oscar nomination for Sounder, Winfield starred in the 1974 film Conrack, in which he co-starred with fellow TNG and Star Trek film guest performer Madge Sinclair (whom he would appear with again in the 1993 mini-series Queen: The Story of an American Family). He then portrayed Jim in the 1974 version of Huckleberry Finn and had a major supporting role in the 1975 film Hustle.

In 1977, he starred in Damnation Alley, which featured TOS guest actor Seamon Glass in a small role. The following year Winfield starred in the film A Hero Ain't Nothin' But a Sandwich, which featured Star Trek: Enterprise guest star Bill Cobbs.

Winfield worked with Robert Hooks on several projects, beginning with the 1972 "blaxploitation" film Trouble Man (co-starring William Smithers). This was followed by the 1979 TV mini-series Backstairs at the White House, which featured Winfield's Wrath of Khan co-star Bibi Besch, as well other Trek alumni such as Noble Willingham and Bill Quinn. Winfield, Hooks, and Besch also co-starred with each other in the 1981 made-for-television movie The Sophisticated Gents, which featured Bernie Casey and Alfre Woodard. The following year Winfield and Hooks co-starred together in the TV movie Sister, Sister.

Winfield is well known for his role as Lieutenant Ed Traxler in the 1984 blockbuster science fiction/action film The Terminator, which also featured Earl Boen, Dick Miller, and Brian Thompson. Winfield followed this with roles in such films as The Serpent and the Rainbow (1988, with William Newman), Presumed Innocent (1990, with Tucker Smallwood), Cliffhanger (1993, alongside Bruce McGill), and Mars Attacks! (1996, with Michael Reilly Burke and Jeanne Mori). He also worked with Christopher Lloyd in the 1993 family film Dennis the Menace.

He appeared with Stephen Collins in two TV mini-series. The first was 1982's The Blue and the Gray, which also featured the likes of Robin Gammell, Gregg Henry, William Lucking, Charles Napier, Duncan Regehr, Dan Shor, and Noble Willingham. The second was 1993's Scarlett, the sequel to Gone with the Wind which starred Colm Meaney.

Winfield and fellow TNG guest actor Paul Eiding were regulars on the short-lived comedy series The Charmings, which aired on ABC during the 1987-1988 season. Winfield then appeared in the recurring role of Isaac Twine on the CBS comedy series Wiseguy, working with Jonathan Banks, Mick Fleetwood, Ken Jenkins, Pamela Segall, and Ron Taylor.

Winfield was a regular on the NBC comedy series 227 during the show's fifth and final season (1989-1990), where he played the role of Julian C. Barlow. Afterward, he had a recurring role as Derron Holloway on the NBC drama series L.A. Law, working with series regulars Corbin Bernsen and Larry Drake, as well as fellow guest stars James Avery, Paul Eiding, John Hancock, Anne Haney, Jennifer Hetrick, Diana Muldaur, and John Vickery. David Carson and Win Phelps were among the directors Winfield worked with on the show.

Winfield played famed boxing promoter Don King in the 1995 biographical TV movie Tyson, co-starring Lilyan Chauvin and James B. Sikking. Winfield later supplied the voice of boxing manager Lucius Sweet, a parody of Don King, in two episodes of the long-running animated series The Simpsons. The title of Winfield's second episode as Sweet, "The Trouble with Trillions," is an obvious reference to the Star Trek: The Original Series episode "The Trouble with Tribbles".

Winfield was one of many Star Trek alumni to lend their voice to the animated series Gargoyles. The others include LeVar Burton, Michael Dorn, Jonathan Frakes, Marina Sirtis, and Brent Spiner from Star Trek: The Next Generation, Avery Brooks from DS9, Colm Meaney from both TNG and DS9, Kate Mulgrew from Star Trek: Voyager, Nichelle Nichols from TOS, and notable guest actors David Warner and W. Morgan Sheppard.

He also voiced in two different animated Batman series: the 1990s version, in the episode "The Mechanic", which also featured the voices of Barry Gordon, John de Lancie, Loren Lester and Paul Williams; and Batman Beyond (1999-2001), on which he voiced the character of District Attorney Sam Young in several episodes. Other Star Trek actors he worked with on the latter series include Terri Garr, Larry Cedar, Clyde Kusatsu, and Michael McKean.

From 1995 through 2003, Winfield had a recurring role as senior supervising angel Sam on the CBS drama series Touched by an Angel. He appeared in thirteen episodes of the show, including ones featuring Ivar Brogger, Jim Metzler, Charles Rocket, David Ogden Stiers, Kenneth Tigar, Harley Venton, and Craig Wasson. Winfield's final acting appearance before his death was in the penultimate episode of Touched by an Angel, which aired on 26 April 2003.

Winfield was the narrator of the A&E true crime series City Confidential from the show's premiere in 1999 until his death in 2004. The last episode he narrated aired on 13 March 2004, less than a week after his death.