The following is a list of holographic characters incorporated into the Paxau Resort holoprogram.

The alien waiter was a character in Neelix's Paxau Resort holoprogram.

He served Gallia nectar to Neelix, Tom Paris, and Harry Kim while Neelix received a foot massage from a holographic Talaxian. Paris thought that the waiter was too formal and had the computer change his clothes into something more casual. (VOY: "Warlord")

He was serving drinks at the bar to some of the Resort guests when some macroviruses attacked the holographic people due to their infrared signatures. (VOY: "Macrocosm")

He assisted Neelix in preparing the resort for his Luau party. At the party, he served drinks to the guests, properly clothed in a Hawaiian shirt with a lei. (VOY: "Alter Ego")

The alien waiter was played by background actor Antony Acker who received no credit for his appearances.
Listed as "Waiter" and "Holowaiter" on the call sheets, Acker filmed his scenes for "Warlord" on Tuesday 10 September 1996, for "Macrocosm" on Monday 30 September 1996, and for "Alter Ego" between Monday 7 October 1996 and Thursday 10 October 1996 on Paramount Stage 16.

This male companion was added by B'Elanna Torres to Neelix's Paxau Resort holoprogram. He handed her a towel and then she went swimming with him. (VOY: "Warlord")

He was talking to a Voyager officer in the resort and the two shared a drink when Q appeared and asked Tom Paris and Harry Kim how he could get a hold on Captain Janeway. (VOY: "The Q and the Grey")

He accompanied a woman to the bar of the resort when the group of people was attacked by several macroviruses. (VOY: "Macrocosm")

He helped Neelix to decorate the resort for his luau party when Harry Kim introduced Marayna to Tuvok. Later, he attended the luau party and wore a traditional lei. (VOY: "Alter Ego")

This man was played by actor Martin Squires who received no credit for his appearances.
He is listed as "Well Built Man", "M Holo Character", "Holodeck Resort Atmos", and "Resort Man" on the call sheets and filmed his scenes for "Warlord" on Tuesday 10 September 1996, for "The Q and the Grey" on Wednesday 11 September 1996, for "Macrocosm" on Monday 30 September 1996, and for "Alter Ego" between Monday 7 October 1996 and Thursday 10 October 1996 on Paramount Stage 16.

A Caribbean band was added by Tom Paris to Neelix's Paxau Resort program to make it more lively. Paris blended in some Earth-like components such as brighter, more casual clothing for resort employees, and the Caribbean band. (VOY: "Warlord")

The three musicians were played by E. Brown, B. Pierce, and L. Spears and are listed as "Sideline Musicians" on the call sheet. They filmed their scenes on Tuesday 10 September 1996 on Paramount Stage 16 and had a set call at 10:30 am. 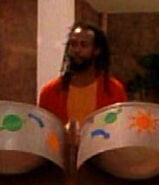 The guests were characters in Neelix's Paxau Resort program. Captain Kathryn Janeway lured the macroviruses to the holodeck where they infected all the holo-characters. Janeway then threw an antigen bomb into the holodeck, destroying the virus. (VOY: "Macrocosm")

The two pictured women are played by A. Davila and T. Clark and the two men by J. Hart and Ron Ravetti.
According to the call sheet, the actors filmed their scenes on Monday 30 September 1996 on Paramount Stage 16 and are listed as "Holodeck Resort Atmos".

The holographic woman was a character in Neelix's Paxau Resort holoprogram. She asked Tuvok and Harry Kim if she could join them, but they both said no after their experience with Marayna. She then smiled and went away. (VOY: "Alter Ego")

The holowoman was played by actress and fashion designer Shay Todd.
According to the call sheet, she filmed her scene on Thursday 10 October 1996 on Paramount Stage 16 and is listed as "Holowoman".

This holographic woman was part of the Paxau Resort holoprogram during Neelix's modifications of the program for his luau festival. She handed leis to the guests and served drinks at the party. When B'Elanna Torres, Tuvok, and Tom Paris returned to the program to check an incoming transmission, this woman tried to give Torres a lei. When Torres refused, she placed a lei on her neck and strangled her. She disappeared when Paris shot at the control interface. (VOY: "Alter Ego")

This "lei strangler", as she is listed on the call sheets of the episode, was played by background actress Linda Li.
She filmed her scenes between Monday 6 October 1996 and Thursday 10 October 1996 on Paramount Stage 16.

These holograms worked as servants, waiters, torch holders, and fire handler at the luau party Neelix organized for the crew of Voyager in the holographic setting of the Paxau Resort. The first three holograms were also present when B'Elanna Torres, Tom Paris, and Tuvok entered the program again while following an incoming transmission. They attacked Paris and Tuvok but disappeared when Paris shot at the control interface. (VOY: "Alter Ego") 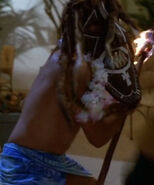 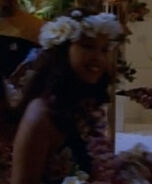 These holographic people were part of Neelix's Paxau Resort holoprogram.

The first woman assisted Neelix during his preparations for the luau party. She was standing on a chair and placing some lanterns. Later, wearing a lei, she attended the luau party and shared her drink with a male guest. (VOY: "Alter Ego")

All but the third woman were at the resort when The Doctor discussed passion with Neelix and holograms of Lord Byron and Mahatma Gandhi. (VOY: "Darkling")

The first three patrons were part of the program when Kes time traveled to the point where Voyager was attacked by the Krenim. Later, when Kes was back in her time, they celebrated with the senior staff of Voyager the party held for Kes at the resort. (VOY: "Before and After")

The performers are listed as "Resort Women", "Resort Atmos", and "Resort BG" on the call sheets of the episodes.
Nichole McAuley was listed as one of the original volleyball players in the episode "Warlord". The call sheet features her among the "4 Beautiful Women", however, she did not appear in the episode. Angela Lloyd was originally scheduled to appear in the episode "Displaced" but was replaced by Adriana del Pomar according to the revised call sheet. Martin Squires was also scheduled to appear in "Darkling" but replaced by Scott Strozier.
They filmed their scenes for "Alter Ego" between Monday 7 October 1996 and Thursday 10 October 1996, for "Darkling" on Wednesday 11 December 1996, and for "Before and After" on Thursday 9 January 1997 on Paramount Stage 16.

Played by Angela Lloyd
(VOY: "Alter Ego", "Darkling", "Before and After")

Played by Scott Strozier
(VOY: "Darkling", "Before and After")

Played by Nichole McAuley
(VOY: "Before and After")

Played by Erica Samuel
(VOY: "Darkling")
Add an image to this gallery

This Talaxian was played by background actress Erinn Allison who received no credit for her appearance.
She was the first female Talaxian to be seen on
Star Trek.
Allison filmed her scene on Tuesday 10 September 1996 on Paramount Stage 16. Her costume was later sold off on the It's A Wrap! sale and auction on eBay. [1]

These three athletes were originally part of Harry Kim's Sports Program Theta-2 that were transferred over to the Paxau Resort program. These athletes were players from the 2216 championship gold medal volleyball team, with whom Kim had been practicing during his spare time. After Paris added a Caribbean band to the program, they started to dance with Neelix. (VOY: "Warlord")

The first and the third woman were massaging Tom Paris and Harry Kim when the two talked about how they could convince Captain Janeway to held the briefings on the holodeck. The second woman passed this conversation carrying a drink. When suddenly Q appears, the two massaging women were with him. (VOY: "The Q and the Grey")

All three were flirting and talking to resort guests when the macroviruses attacked the holographic resort people. (VOY: "Macrocosm")

The third woman assisted Neelix in preparing the resort for his luau party. Later, she also attended the luau wearing a lei. (VOY: "Alter Ego")

The first woman was sitting on a sun lounger when The Doctor discussed passion with Neelix and holograms of Mahatma Gandhi and Lord Byron. (VOY: "Darkling")

The second woman was present during a party at the resort which Kes experienced while time travelling to the point where the Krenim attacked Voyager. (VOY: "Before and After")

The first and the third woman were standing at the bar with their drinks and smiling at the newly arrived Nyrian. (VOY: "Displaced")

Played by Michele Edison
(VOY: "Warlord", "The Q and the Grey", "Macrocosm", "Before and After")

Played by Adriana del Pomar
(VOY: "Warlord", "The Q and the Grey", "Macrocosm", "Alter Ego", "Displaced")
Add an image to this gallery
Retrieved from "https://memory-alpha.fandom.com/wiki/Paxau_Resort_holograms?oldid=2451644"
Community content is available under CC-BY-NC unless otherwise noted.