Peliar Zel II was the inhabited second planet in the Peliar system. This was the homeworld for a warp-capable native species. This species had colonized the two moons, Alpha moon and Beta moon, of this planet. Peliar Zel II was a Federation member.

In the 2360s, Alpha moon's government had developed a power source by harnessing the planet's magnetic field as its source of energy. Although this caused environmental damage to Beta moon in the process, Alpha moon refused to give up its new power source. This caused conflicts between both colonies until the dispute was mediated by Ambassador Odan in 2367. (TNG: "The Host")

In 2376, the location of Peliar Zel was labeled on a star chart in astrometrics on USS Voyager in 2376. (VOY: "Child's Play", display graphic)

According to the script, the pronunciation for Peliar Zel was "pen-lee-ar ZEHL".
The
Star Trek Encyclopedia (4th ed., vol. 2, p. 131) classified Peliar II as a class M planet.
According to Star Trek: Star Charts ("United Federation of Planets III") and Stellar Cartography: The Starfleet Reference Library ("Federation Historical Highlights, 2161-2385"), the Peliar Zel system was located in the Alpha Quadrant. 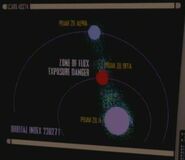 A graphic of Peliar Zel II and its two moons

Peliar Zel in relation to Daran V, Dimorus, Kaldra IV and Nimbus III
Add an image to this gallery
Retrieved from "https://memory-alpha.fandom.com/wiki/Peliar_Zel_II?oldid=2517825"
Community content is available under CC-BY-NC unless otherwise noted.