Penny Johnson Jerald (born 14 March 1961; age 61) is an actress known to Star Trek fans for her role as Kasidy Yates in Star Trek: Deep Space Nine. She had previously played Dobara in the Star Trek: The Next Generation seventh season episode "Homeward". Her costume from "Homeward" was later sold off on the It's A Wrap! sale and auction on eBay. [1]

One of Johnson Jerald's early television guest appearances was in an episode of T.J. Hooker, starring William Shatner and her DS9 co-star James Darren. She was a regular cast member on The Larry Sanders Show with Scott Thompson and Wallace Langham as well as during the first three seasons of the popular FOX television series 24, on which she played Sherry Palmer, the duplicitous ex-wife to President of the United States David Palmer.

She was just one of a few Star Trek stars to appear in DC 9/11: Time of Crisis, where she played Condoleezza Rice. Other Star Trek stars appearing in the film include frequent DS9 guest star Gregory Itzin who played John Ashcroft, Stephen Macht who played Paul Wolfowitz, and Lawrence Pressman who played Dick Cheney. Johnson Jerald also co-starred in the much-lauded 2000 made-for-television docu-drama The Color of Friendship (with Lindsey Haun). She played Condoleeza Rice again in the controversial television movie Path to 9/11 (2006). Johnson Jerald had a recurring role in the fourth season of The 4400, reuniting with DS9 showrunner Ira Steven Behr and working alongside fellow DS9 actor Jeffrey Combs and TNG guest actor William O. Campbell.

In 2017, Johnson Jerald joined the main cast of The Orville, a sci-fi comedy series on FOX that has been described as a tribute to Star Trek, portraying chief medical officer Claire Finn. The series was created by and stars Seth MacFarlane and features many Trek alumni before and behind the camera. 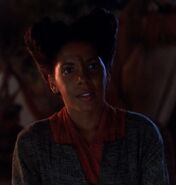 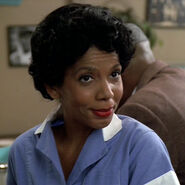 Cassie
DS9: "Far Beyond the Stars"