Penthara IV was the inhabited fourth planet in its star system. This planet was the location of a Federation colony that had existed on the planet for at least a century by 2368.

The planet was tectonically very stable; no earthquakes had been registered for over a hundred years. Twenty million colonists called the planet home. One of the major settlements on Penthara IV was New Seattle. The planet was governed by a group of colony leaders who jointly decided about the fate of the colony.

In 2368, one of the uninhabited continents of Penthara IV was struck by a type C asteroid. The impact created an enormous dust cloud (a cloud depth of twelve kilometers was measured) and massive atmospheric distortions that threatened to impose a situation similar to a nuclear winter on the planet. Only less than 20% of the normal sunlight was able to penetrate through the dust resulting in a rapid cooling of the planet surface.

Initial forecasts predicted a temperature drop of ten to twelve °C within the first ten days after impact. A short time after the impact, two tropical rivers began to freeze, so it was time to counteract the cooling of the planet.

In order to do so, the colony leaders requested assistance from the USS Enterprise-D. Together with leading scientist Dr. Moseley, the crew developed a plan to phaser drill holes into subterranean pockets of carbon dioxide to release enough of the gas to form an envelope which would temporarily hold in the heat from the sun, effectively creating a greenhouse effect, something the colony leaders had successfully prevented from happening for decades.

After the correct number, depth and location of bore sites was calculated, the ship's phaser was used to drill around 20 holes into the planet's crust, effectively releasing the gas. The plan seemed to work at the beginning, as the temperature drop was halted and two equatorial thermal monitoring stations even reported a rise in temperature, as desired, but after some time, enormous earthquakes were detected.

It turned out, that the drilling had destabilized the formerly stable tectonic plates and the mantle was collapsing around the bore sites, causing several volcanic outbreaks and more severe earthquakes, measured at between 8 and 8.5 on the Richter scale. The colony was built to be fairly earthquake-proof, but the volcanic plumes were creating new problems, as the additional dust thrown into the atmosphere only increased the problematic cloud cover and it was estimated that after some days of volcanic activity, no more sunlight would be able to reach the surface.

Another plan was devised to remove the dust cloud from the planet's atmosphere: by ionizing the electrostatically-charged particles with the ship's phaser, the dust was converted into high-energy plasma. This plasma was then absorbed by the deflector shields of the Enterprise and redirected into space.

Though there was the risk of causing a cascading exothermal inversion which would have completely burned off the planet's atmosphere, the plan worked and the colony and its millions of inhabitants were saved from a nuclear winter. The temperature rose to a normal level again, the snow stopped, and the amount of particulates in the atmosphere was identical to the amount measured before the asteroid impact. The volcanoes finally also came to a rest after some time. (TNG: "A Matter of Time")

In 2371, the location of Penthara IV was labeled in the star chart Data and Picard were studying in stellar cartography aboard the USS Enterprise-D. (Star Trek Generations, display graphic)

Based on the planet's seemingly close proximity to the Starbase 214, it would seem that this planet is in, or is relatively near the Alpha Quadrant.

In the Mirror universe, a map of the surface of the planet was seen in a rebel base in the Badlands. (DS9: "Through the Looking Glass")

A world map of Penthara IV 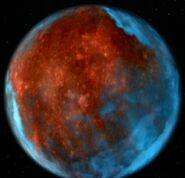 Penthara IV during removal of the ionized plasma