Peopatric Boone is an actor who appeared as a Maquis member in the Star Trek: Deep Space Nine third season episode "Defiant". He was identified by the call sheets of the episode and filmed his scenes on Friday 7 October 1994 and Monday 10 October 1994 at Paramount Stage 18.

He also appeared as an Ilari conspirator in the Star Trek: Voyager third season episode "Warlord" for which he filmed his scenes on Thursday 5 September 1996, Friday 6 September 1996, and Monday 9 September 1996 on Paramount Stage 16. 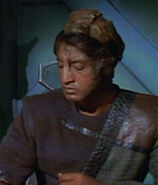 Ilari conspirator
VOY: "Warlord"
(uncredited)
Add an image to this gallery
Retrieved from "https://memory-alpha.fandom.com/wiki/Peopatric_Boone?oldid=2541534"
Community content is available under CC-BY-NC unless otherwise noted.