Peter "Pete" Turner (born 10 December 1958; age 61) is a stuntman, stunt actor, and stunt coordinator who portrayed four different roles in Star Trek Nemesis and served as a stunt double for Scott Bakula in the Star Trek: Enterprise episode "Home". He received no credit for the latter one.

Turner was born as Peter Turner Malamphy in San Marino, California and has doubled for stars such as William Fichtner, Jeff Daniels, Michael Biehn, Andrew Divoff, Christopher Walken, and Ted Danson. Between 1976 and 1980 was he a member of a special force and between 1974 and 1988 he performed in several stunt live shows, including as "Conan" at the Universal Studio Tours. Turner is a board member of the Los Angeles Veterans Artists Association. 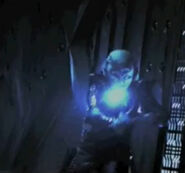 Retrieved from "https://memory-alpha.fandom.com/wiki/Pete_Turner?oldid=2380601"
Community content is available under CC-BY-NC unless otherwise noted.