Peter Harmyk (born 18 July 1967; age 52) is an actor and author who appeared as a the recurring background character Crewman Thompson in several episodes of Star Trek: Voyager. As a background actor he received no credit for his appearances. In addition, he appeared in first and second season episodes of Star Trek: Enterprise and worked as stand-in for actor Erick Avari on the episode "Terra Nova".

Born in Perth Amboy, New Jersey, Harmyk attended the Syracuse University in Syracuse, New York between 1986 and 1989. He earned his Master of Intellectual Property and his Juris Doctor from the Franklin Pierce Law Center in Concord, New Hampshire in 1993. At this time he also worked as associate attorney at the Civil Practice Clinic in Concord. In 1995 he became director of development for Crystal Pictures in Hollywood, California and since 1996 he has been a record producer for Rogue Records as well as a novelist since 1999. [1] 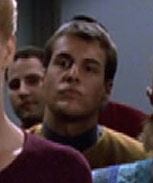 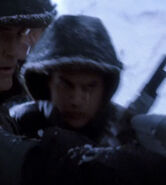 Retrieved from "https://memory-alpha.fandom.com/wiki/Peter_Harmyk?oldid=2414571"
Community content is available under CC-BY-NC unless otherwise noted.