Phil Adams (born 14 April 1935; age 85) is a former stuntman, stunt actor, and stunt coordinator who appeared in three episodes of Star Trek: The Original Series, two times as a stunt double and once as a stunt actor. He received no credit for his appearances. Adams' sister Donna was married to actor Ernest Borgnine and the couple has one child, Cris Borgnine, who later worked as an actor, producer, cinematographer, and visual effects artist such as rigging supervisor on Star Trek Into Darkness.

Adams started his career in the 1950s with background and stunt appearances in the sport comedy Kill the Umpire (1950), the crime drama Hot Rod Rumble (1957), episodes of West Point (1957), the war drama Darby's Rangers (1958, with Dick Crockett and Bob Herron), the war drama Lafayette Escadrille (1958, with Paul Fix, Bob Hoy, and Ron Burke), the comedy The Last Hurrah (1958, with Jeffrey Hunter, Gail Bonney, and Chuck Hicks), and episodes of the comedy series The Adventures of Ozzie and Harriet (1956-1960, with Parley Baer).

His credits as stunt coordinator in the 1990s include the horror comedy Nothing But Trouble (1991, with Kane Hodder, Maria R. Kelly, Debby Lynn Ross, and Lynn Salvatori), the comedy sequels The Naked Gun 2½: The Smell of Fear (1991) and Naked Gun 33 1/3: The Final Insult (1994), the horror film Sleepwalkers (1992, with Michael Haynes, Noon Orsatti, Spice Williams, Jane Austin, and Jim Wilkey), the comedy Only You (1992), the comedy I'll Do Anything (1994, with Gary Wayton and Bobby Burns), the thriller Body Shot (1994, with Tony Cecere, Cheryl Wheeler Duncan, Sonia Jo McDancer, Mark Ginther, and Merritt Yohnka), and the comedy George of the Jungle (1997, with Steve Blalock, Pat McGroarty, John Meier, Tim Rigby, Nancy Thurston, and Pat Romano).

In the more recent years, Adams worked as stunt coordinator on the war drama Enemy at the Gates (2001), the comedy Dirty Love (2005, along with Laurence Rosenthal), the comedy Forget About It (2006), the fantasy adventure City of Ember (2008), and the comedy How Do You Know (2010, working with B.J. Davis). He also performed stunts in the romance I Dreamed of Africa (2000), the Being Eve episode "Being Just Mates" (2001), and the video game adaptation Doom (2005, with Karl Urban, Dwayne Johnson, Doug Jones, and Tanoai Reed). 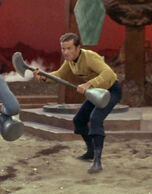 Retrieved from "https://memory-alpha.fandom.com/wiki/Phil_Adams?oldid=2418285"
Community content is available under CC-BY-NC unless otherwise noted.