Admiral Freeman
Other characters
Phillip LaMarr (born 24 January 1967; age 55) is an American actor, voice actor, comedian, and writer who voiced a command lieutenant and Admiral Freeman in the animated series Star Trek: Lower Decks. He also provided the voice of Grack in The Young Hunter.

LaMarr also starred in the '90s comedy film Free Enterprise directed by Robert Meyer Burnett, which follows the lives of several Star Trek fans, and stars William Shatner as an exaggerated version of himself.

In 2000, he appeared in A Man is Mostly Water, which was Anton Yelchin's film debut. In 2002, he appeared in Jane White is Sick & Twisted with Wil Wheaton and in Manna from Heaven with Louise Fletcher. In 2005, he starred in Back to Midnight alongside Kirstie Alley and Ed Begley, Jr.. In 2008, he appeared in Step Brothers with Gillian Vigman.

Among his many voice roles, LaMarr voiced the character of Hermes Conrad on Futurama, who was also married to a character voiced by Lower Decks co-star Dawnn Lewis. 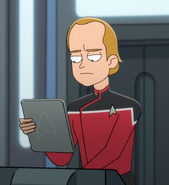 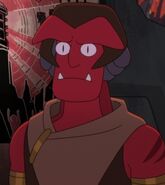 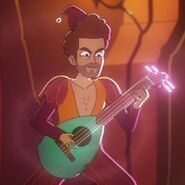 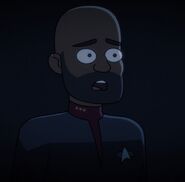