Philip "Phil" D. Weyland (born 20 April 1948; age 72) is an actor who worked as stand-in and played background roles on several Star Trek films. In addition to this work he was a dialogue coach on Star Trek VI: The Undiscovered Country and worked as dialogue coach for Majel Barrett Roddenberry and David Ogden Stiers on the Star Trek: The Next Generation fourth season episode "Half a Life". 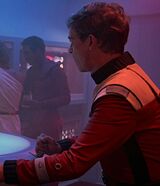 Retrieved from "https://memory-alpha.fandom.com/wiki/Philip_Weyland?oldid=2484728"
Community content is available under CC-BY-NC unless otherwise noted.