Pizza Hut, Inc. is the world's largest pizza company and operates over 13,600 restaurants in more than 87 countries. It is a brand which is owned and operated by Yum! Brands of Louisville, Kentucky, USA.

In 1993 and 1994, the fast food chain retailed eight Star Trek-themed plastic beverage cups in a number of countries worldwide. These cups included 3.5 inch-long removable toys which attached to their lids. Similar versions of the 1994 toys were also released by Burger King in Germany.

For the 1994 UK promotion, a special Star Trek pizza menu, kids' Starfleet emblem stickers, and free copies of the "Special Pizza Hut Edition" of the Star Trek: The Official Fan Club of the UK Magazine were featured at restaurants. 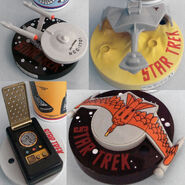 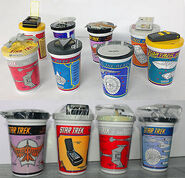