The Enterprise finds a planet inhabited by aliens who were once followers of the Greek philosopher Plato.

Summoned by an urgent distress call for medical help, the USS Enterprise landing party consisting of Kirk, Spock, and McCoy find a group of aliens who supposedly model their society on the teachings of Plato. Their leader is suffering from a massive infection in his leg and is close to death. Alexander, a servant to the Platonians, quietly suggests to Philana that they should not kill the Enterprise landing party, given that they are trying to save their leader, Parmen. Before he can finish his sentence, Philana telekinetically makes him bite his hand.

Kirk, Spock, and McCoy discover the Platonians' powerful psychokinetic abilities, as the man's delirium has violent effects on his surroundings. Another Platonian trait is extreme longevity, as well as frail physical immunity seemingly caused by their emphasis on mental prowess. This is what caused their powerful ruler to be so vulnerable to what should have been a minor treatable injury.

The result of a eugenics, "Plato's stepchildren" had escaped to Earth in the time of the ancient Greek philosopher Plato when their star, Sahndara, went supernova. After Plato's death they established a republic based on his philosophy, where 38 inhabitants live a life of quiet contemplation and self-reliance.

A simple cut in the leg had developed an unknown infection which caused Parmen to have a fever and lose control of his powers. Furniture is thrown around and the Enterprise is shaken in orbit, while Kirk, Spock, McCoy, and Alexander duck and hide from the flying objects. "Fascinating. I believe we are experiencing the psychokinetic manifestations of Parmen's delirium", Spock notes. Philana, Parmen's wife, is able to distract Parmen long enough for McCoy to sedate him with a hypospray, ending the chaos. Later, Dr. McCoy's treatment of Parmen is effective and the landing party prepares to leave the planet. However, the Enterprise is frozen; Scott reports that there are no functional transporters, navigation or even subspace communication with Starfleet. Captain Kirk barges into Parmen's chamber, and Parmen strips Kirk of his phaser and tells him that guests must recognize his supremacy. In an allusion to the Greek ideal of guest-friend, Kirk retorts: "Guest? You don't know the meaning of the word. Guests are not treated like common prisoners." Parmen uses his psychokinetic powers to force Kirk to slap himself in the face repeatedly.

After the ordeal with Kirk smacking himself around, he, Spock, and McCoy are back in their guest chamber, trying to contact the Enterprise with his communicator to no avail. The Platonians summon them and seem grateful for McCoy's help. They provide the landing party with variety of gifts: the shield of Pericles for Kirk, a kithara for Spock, and a collection of Greek cures written by Hippocrates himself for McCoy. Parmen appeals for Kirk's forgiveness. He says he will release the ship, but he wants McCoy to remain on the planet.

McCoy refuses and Parmen says he will not be refused. Kirk says that he cannot consider himself a descendant of Plato. Spock points out, "Plato wanted truth and beauty and above all, justice." Parmen says that theirs is the most democratic society that ever was – unlike the Federation, which uses weapons and fleets of starships to enforce justice, the Platonians use the power of the mind. He says he wants to persuade Kirk and Spock to leave peacefully so as not to upset McCoy.

Parmen uses his mental powers to intimidate and humiliate Kirk and Spock into compliance. First, he makes them sing a song and dance a jig. Kirk tells McCoy that he is not going to let him stay behind and Parmen makes Kirk recite some lines from William Shakespeare's Sonnet LVII: "Being your slave what should I do but tend | Upon the hours, and times of your desire? | I have no precious time at all to spend; | Nor service[s] to do, 'til you …". Parmen makes Spock dance some more and then forces him to laugh and cry, torturing his Vulcan psychology by forcing severe emotion, such as hearty laughter and a good cry out of him.

McCoy decides to volunteer to stay but Kirk still refuses, pointing out that once they are gone they and the Enterprise will be destroyed. Alexander speaks up, saying that Kirk is right. He gives a speech about how he used to think it was his own fault that he did not have the same powers as the Platonians and that he was lucky that they had kept him around. But now, after the Enterprise crew stood up to the Platonians and showed them for what they are, he realizes how they've been putting him down.

Spock questions Alexander about the powers and determines that the power had manifested itself shortly after the Platonians had used up their food stores and started eating local food. McCoy scans Alexander's blood with his medical tricorder and finds that Parmen has more kironide, which is broken down by the pituitary gland. McCoy synthesizes some kironide and injects himself, Kirk, and Spock – to double that of Parmen's level. Kirk suggests that Alexander get a dose, take Parmen's place and rule the planet, but Alexander refuses: "You think that's what I want? Become one of them? Become my own enemy? Just lie around like a big blob of nothing and have things done for me? I want to run around for myself. If I am going to laugh or cry, I want to do it for myself. You can keep your precious power. All I ask is one thing: if you do make it out of here, take me with you."

The conversation is interrupted when the Platonians force Lieutenant Uhura and Nurse Christine Chapel to beam down as Kirk, Spock, and McCoy look on in bewilderment. The women, unable to speak, walk away and are forced against their will to prepare for the evening's festivities. Kirk angrily surmises that the Platonians have now found some new entertainment for their amusement.

Later that night, Uhura and Chapel step out into the main hall, both dressed in fabulous Greek dresses as Kirk and Spock join them, both clad in short Greek tunics and laurel leaf crowns. Kirk asks Spock to try to lift some plates of food, but the powers have not kicked in yet. Kirk, Spock, Uhura, and Chapel are led to a stage. Parmen would like to welcome McCoy, but he has to convince McCoy to change his mind first. He makes Spock sing what he calls "a serenade from the laughing spaceman" to Uhura and Chapel.

Then, the four are split into two pairs: Uhura and Kirk, and Chapel and Spock. Chapel and Spock are forced to kiss despite their protests; Chapel confesses that she has wanted to be close to Spock for so long but now she wants to "crawl away and die". Uhura likewise confesses to Kirk that she was so often calmed by Kirk's presence when she was frightened on the bridge of the Enterprise. The two couples struggle in vain to avoid being forced to kiss.

After the kisses, Parmen compels Kirk to crack a bullwhip at Uhura and Spock to brandish a hot poker rod at Chapel. While Parmen is distracted controlling the four officers, Alexander attempts to sneak up on him with a knife. Parmen shifts his focus to trying to make Alexander turn the knife on himself. Meanwhile, Kirk begins to feel his telekinetic power building and laughs once he prevents Alexander from hurting himself. Parmen cannot believe that Kirk has telekinetic abilities and tries to test them. He sends Alexander to threaten Kirk with the knife, but again the captain turns the tables on the Platonian. For a brief time, the two minds fight for control of Alexander. Kirk's power is proven the greater but ultimately they both release him. Alexander begins to use his free will to attack Parmen but Kirk stops him, asking simply, "Do you want to be like him?" Alexander struggles with his conscience, but finally drops the knife, heaping contempt onto his former leader instead. Parmen sees that Kirk has spared his life, and appears repentant. He promises that he will be more benevolent towards future visits by other starships. Spock and Kirk are very dubious of the reform and so stresses that any new visitors can easily be dosed with kironide as well. Parmen appears to acquiesce to this truth and Kirk seems satisfied that the "Platonian problem" has been solved.

Kirk calls Scotty for transport, saying that he has "a little surprise" for the chief engineer. Kirk intends to make good on his earlier promise to rescue Alexander from Platonius and the Enterprise departs soon after.

"Alexander, where I come from, size, shape, or color makes no difference."

- Kirk, on life outside Platonius

"Doctor McCoy, you may yet cure the common cold."

"Philosopher kings have no need of titles."

"I'm Tweedledee, he's Tweedledum."
"We're spacemen marching to and from."
"We slythe among the mimsey toves."
"And tire among the borogoves."

- Kirk and Spock, performing for Parmen – Listen to this quote file info

"Being your slave, what should I do but tend."
"Upon the hours, and times of your desire?"
"I have no precious time at all to spend."
"Nor service to do, 'til you..."

"However, I have noted that the healthy release of emotion is frequently very unhealthy for those closest to you."

- Spock to McCoy, on their humiliations

"You think that's what I want? Become one of them? Become my own enemy?"

- Alexander to Kirk, on receiving psychokinesis

"For so long I've wanted to be close to you. Now all I want to do is crawl away and die!"

- Dionyd and Eraclitus, on Spock's kiss – Listen to this quote file info

- Uhura, before her kiss with Kirk

- Alexander and Kirk, as Alexander points a knife at Parmen

"Despite your brains, you're the most contemptible things that ever lived in this universe. "

"To us, killing is murder. Even for revenge."

- Kirk to Parmen, on why he was spared

"Uncontrolled, power will turn even saints into savages. And we can all be counted upon to live down to our lowest impulses."

- Parmen to Kirk, before the landing party departs

"Kirk to Enterprise. Mr. Scott, prepare to beam us up. I have a little surprise for you. I'm bringing a visitor aboard."

- Kirk, not forgetting his promise to take Alexander with him (last lines)

The remastered version of "Plato's Stepchildren" aired in many North American markets during the weekend of 16 June 2007. Very few new effects were required. Like all other remastered episodes, the physical model of the Enterprise has been wholly replaced by a CGI model throughout the episode. Similarly, the Enterprise is universally shot at different – and typically closer – angles than in the original.

The most dramatic new effect is that of the planet Platonius. It has changed from its original, Mars-like appearance to one that greatly resembles Earth.

Dr. McCoy's tricorder insert also received a touch-up. Its display was transformed from a bar graph that approximated sickbay displays to an integrated line chart. The benefit of the changed effect is that the display now more easily reads as a true comparison of the blood of Alexander and Parmen, along with (ostensibly) Human norms.

In addition, the digital restoration of non-SFX shots has resulted in an overall brightening of color that is perhaps more profound in this abstractly-designed episode than in others. 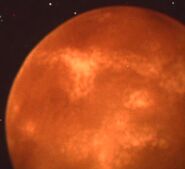 Released with "Whom Gods Destroy", the volume was originally unrated, as it was released prior to the Video Recordings Act 1984. After 1985, it received a rating of PG.

Retrieved from "https://memory-alpha.fandom.com/wiki/Plato%27s_Stepchildren_(episode)?oldid=2472497"
Community content is available under CC-BY-NC unless otherwise noted.