Plomeek soup or broth was a Vulcan food. It was usually described as bland in taste, although variations such as a spicy version existed. It was considered a traditional morning meal on Vulcan. (ENT: "Unexpected")

In 2151, Crewman Elizabeth Cutler tried it to impress T'Pol by sampling it. (ENT: "Strange New World")

Later that year, Jonathan Archer encouraged T'Pol to eat food provided by their captors on Coridan, saying she would be unable to exchange it for some plomeek broth. (ENT: "Shadows of P'Jem")

When Hoshi Sato was in charge of the galley in 2152, she claimed that she was too busy for "special orders", such as T'Pol's request for plomeek broth, and that she would like that night's prepared dish, oden, better. (ENT: "Singularity")

In 2267, Nurse Christine Chapel made the mistake of serving it to Spock during his pon farr. Spock tossed the bowl at her, causing a public scene. Later, he asked if she would prepare it again for him as an apology. (TOS: "Amok Time")

In 2370, while in a holographic program on the USS Enterprise-D set in 2161, William T. Riker, assuming the role of Enterprise's chef, started preparing Commander T'Pol's plomeek broth before Enterprise reached Rigel X. (ENT: "These Are the Voyages...")

Later that year, it was again used to impress a Vulcan, when Quark added it to a meal for the Maquis member Sakonna. (DS9: "The Maquis, Part I")

In 2371, Neelix, in an attempt to produce authentic native dishes for the crew of USS Voyager, made plomeek soup for Tuvok, although he found Neelix's modifications too spicy. (VOY: "Faces")

Julian Bashir often ordered plomeek soup. In early 2371, he ordered it with a touch of basil. Later that year, he ordered it when he and Miles O'Brien had lunch. (DS9: "The House of Quark", "The Die is Cast")

In 2377, Neelix offered Ensign Harry Kim a choice of eating eggplant parmesan or plomeek soup, shortly before Kim left to take command of a Kraylor vessel he would later dub Nightingale. Kim replied that either food was fine with him, until Neelix advised him that a commanding officer should be decisive, leading Kim to choose the plomeek soup. (VOY: "Nightingale")

The plomeek is quite obviously a plant, or a part of a plant, indigenous to Vulcan and used there for food. It has never actually been shown in any TV series episodes or motion pictures.
Varieties of plomeek soup 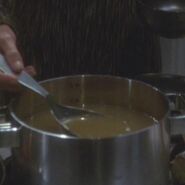 Plomeek broth
Add an image to this gallery

Retrieved from "https://memory-alpha.fandom.com/wiki/Plomeek_soup?oldid=2464018"
Community content is available under CC-BY-NC unless otherwise noted.