A police officer, policeman, or cop, was a law enforcement officer who was responsible for enforcing laws, usually on a local level. Police officers were often identified by traditional accouterments. (TOS: "The City on the Edge of Forever")

In 1996, after a decades-long ordeal on 20th century Earth, a mentally confused Captain Braxton from the 29th century called a Los Angeles police officer a "quasi-Cardassian totalitarian." (VOY: "Future's End")

In 2004, police officers of the Detroit Police Department arrested Loomis after being tipped off by Jonathan Archer and T'Pol of his involvement in a series of local kidnappings. (ENT: "Carpenter Street")

During the USS Enterprise's pursuit of a Gorn starship that had destroyed the colony on Cestus III, Captain Kirk explained that it was imperative to stop the Gorn, because "if the aliens go unpunished, they'll be back, attacking other Federation installations." When Spock questioned the decision, Kirk justified his decision, stating, "It's a matter of policy. Out here, we're the only policemen around. And a crime has been committed." (TOS: "Arena")

Contrarily, in the first draft script of ENT: "Fortunate Son", Admiral Forrest told Captain Archer, "You're out there as an explorer not a policeman."

While investigating murder accusations made by the Klingon Empire against Worf in 2372, Odo discovered a problem from those he questioned. The problem being that they were "too willing to answer questions," and that he has found that he was "always suspicious of people who are eager to help a police officer." (DS9: "Rules of Engagement") 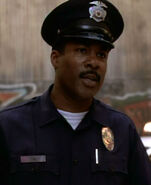 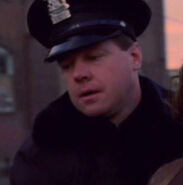 Gene Roddenberry studied three years of policemanship and was an officer of the Los Angeles Police Department before becoming a writer full-time.