Prime Directive is a Pocket TOS novel written by Judith and Garfield Reeves-Stevens. Published by Pocket Books, it was first released in hardback in September 1990.

From the book jacket
Starfleet's most sacred commandment has been violated. Its most honored captain is in disgrace, its most celebrated starship in pieces, and the crew of that ship scattered among the thousand worlds of the Federation…

Thus begins Prime Directive, an epic tale of the Star Trek universe. Following in the bestselling tradition of Spock's World and The Lost Years, Judith and Garfield Reeves-Stevens have crafted a thrilling tale of mystery and wonder, a novel that takes the Star Trek characters from the depths of despair into an electrifying new adventure that spans the galaxy.

Journey with Spock, McCoy, and the rest of the former crew of the starship Enterprise to Talin – the planet where their careers ended. A world once teeming with life that now lies ruined, its cities turned to ashes, its surface devastated by a radioactive firestorm – because of their actions. There, they must find out how – and why – this tragedy occurred and discover what has become of their captain.

During the last year of the first five-year mission, the USS Enterprise is called to the pre-contact world of Talin IV. The mission is unusual from its inception, as the Enterprise is not allowed to travel at warp speed, nor use subspace communications for several days – an unusual precaution, as they are approaching a world that should have no means of detecting their approach. An observation post has been built on the Talin moon by the Federation's First Contact Office (FCO), to observe the indigenous culture in preparation for a possible first contact. The Talin, a reptilian race with a culture comparable to Earth in the late 20th century, are divided into two principle factions – the "Browns" and the "Greens", engaged in their own "Cold War". The First Contact Office and the crew of the Enterprise are both anxious to see the Talin survive this highly volatile point in their history, but are prohibited from intervening by the Prime Directive. The possibility of a first contact is complicated by the fact that the Browns and the Greens are perilously close to instigating a nuclear war. At the same time, scientists on Talin are on the verge of discovering the existence of subspace communications through experiments with dilithium. Both these facts mean that the FCO and the Enterprise must be particularly careful to avoid detection. Further complicating matters, the elderly and curmudgeonly Dr. Alonzo Richter, creator of the Richter scale (a complex grading of cultural development by which a planet is determined to be ready for first contact) has also traveled to Talin IV, advocating ignoring his own scale and that the Talin be contacted immediately.

While observing the planet and the tensions between its two superpowers, Kirk learns that the FCO has been caught and photographed by military observation posts while spying on the planet, possibly exacerbating the tense political situation and perhaps even violating the Prime Directive. He leads an away mission to secretly retrieve data from the Talin military to determine how badly the FCO mission has been compromised. As he returns, a nuclear missile explodes in its silo, leading to limited nuclear exchange between the Browns and the Greens. Determining that the explosion was accidental and was in fact likely to impair the planet's natural cultural evolution, Kirk and the Enterprise act quickly and covertly to disable or destroy the missiles before they can cause further harm. The near destruction of the world, and (to the Talin) miraculous chain of events that saved them, pull the Talin back from the brink of destruction and instigate a new period of peace and cooperation. Kirk convenes a board of inquiry on his own actions, and is determined to have saved the Talin without contravening the Prime Directive. Almost immediately after, however, the entire nuclear arsenals of both the Browns and the Greens are launched without warning or reason. When Kirk attempts to once again prevent the Talin from destroying themselves, a nuclear missile impossibly targets and strikes the Enterprise, seemingly indicating that Kirk's actions have revealed the presence of the Enterprise. The ship is nearly destroyed, and Talin IV is swept by firestorms. Scotty, the only member of the senior staff not on the bridge, reluctantly charges Kirk with violating the Prime Directive, and destroying a world.

Kirk, Spock, Chekov, Sulu, and Uhura become infamous for their actions, known as the "Enterprise Five". When Starfleet threatens to court martial all five, Kirk resigns in a vain attempt to protect his crew. Starfleet refuses to investigate the bizarre chain of events that led to the destruction of Talin IV. McCoy attempts to force the issue by punching an admiral, but later resigns himself when he realizes the Starfleet would rather see the issue swept under the rug than face the negative publicity of a high profile trial. Chekov and Sulu soon follow. Spock is demoted to ensign, and also resigns, Uhura is the only member formally tried, and is given a dishonorable discharge. Despite being separated and disgraced, all of Kirk's crew work to return to Talin (now branded "Kirk's World") and determine what actually happened. Kirk finds himself working under an assumed name on a terraforming project and as a cargo handler on a freighter. Spock joins forces with a group of radical college students who advocate the repeal of the Prime Directive on humanitarian grounds. Sulu and Chekov join the crew of an Orion smuggler and slave trader in hopes of stealing his ship. McCoy and Uhura purchase a ship and work to create a false identity for McCoy, the dreaded space pirate "Black Ire". While the rest of crew work to reach Talin, Scotty finds himself frustrated in his own efforts investigate the disaster, while he supervises the repairs to the Enterprise under the direct command of the arrogant Lieutenant Lawrence H. Styles.

Spock manipulates the student group and the Vulcan embassy to secure credentials for himself and Dr. Richter to speak to the Federation Council. Spock deliberately steers the conversation so that the assembly is forced to concede that Talin IV, by merit of the worlds held in trust for them by the Federation for future development once they achieve space travel, could already be considered a de facto member of the Federation. Based on this premise, all the Talin must do to receive Federation aid is request it. Spock then stuns the Council by introducing two Talin astronauts, one from each of the warring nation states. With the assistance of Richter and the FCO crew, the joint mission escaped just before the disaster.

The crew reunite at the now-closed FCO outpost on the Talin moon. Spock's investigations reveal that the natural development of the Talin was in fact harmed by extraterrestrial influence… but not Kirk, the Enterprise, or the crew of the FCO. These aliens, who call themselves the Many, resemble large insects, and operate as a hive mind, exist on solar energy, and communicate by means of organically-occurring radio. Kirk discerns that the Many created the conditions and instigated the nuclear war on Talin IV to prepare the planet for consumption by another entity, a creature called the One. The Many tell Kirk where to find the One. Scotty, having fitted a new pair of warp engines to the Enterprise, is tasked with locating the One, and brings along the Enterprise Five as observers for the Talin. Once beyond the jurisdiction of the Federation, Scotty orders Kirk and the rest of the crew to assume their usual posts. The One is revealed to be a massive, planet-sized creature moving slowly through space towards Talin IV. Spock posits that the One is immensely old, possibly older than this universe. In sixty years, the One will reach Talin IV and consume it. While McCoy advocates destruction of the One, comparing it to a dangerous shark or other predator. Kirk points out that a shark can't help being a shark; moreover, it is extremely unlikely that the Enterprise (or all of Starfleet, for that matter) could have the firepower necessary to destroy the impossibly old planet-sized creature. The Federation and the Talin arrange for the One to be redirected to a gas giant in the Talin system, saving both the Talin and the One.

Thanks to Spock's presentation to the Federation Council and the truth about what happened at Talin revealed, emergency relief is rushed to aid the stricken world. Just as the rescue mission commences, Kirk and the rest of the Enterprise Five are reinstated to full rank and resume their mission, with an apology from the Federation. Spock discovers that through a natural ability to weave a protective cocoon, over two billion Talin have survived the disaster, and are waiting in hibernation. Kirk leads the first away team to the planet's surface, and makes the long-awaited first contact with a Talin child, with the words, "Let me help."

"You have broken our most sacred commandment, James T. Kirk – and in doing so, destroyed a world."

"As of this day, you are relieved of your command, stripped of your rank and all accompanying privileges, and discharged from Starfleet."

"May whatever gods there are have mercy on your soul." 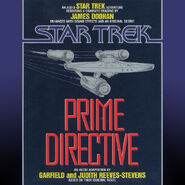 Anne Gauvreau
Captain of the cargo vessel Ian Shelton; former Starfleet officer and first officer aboard the USS Yorktown under Captain Matthew Decker. She hires Kirk as cargomaster.
Komack, Fitzpatrick, and Nogura
Gauvreau's three black and orange cats, each named after a Starfleet admiral.
Zalan Wilforth
Director of FCO Outpost 47.
Carole Mallett
Head of sampling operations at FCO Outpost 47.
Mario Cardinalli
Communications manager at FCO Outpost 47.
Alonzo Richter
Renowned anthropologist and creator of the Richter Scale, the complex scale by which a worlds development is measured and evaluated for potential contact by the Federation. He is very old and irascible, and has a penchant for swearing in Klingon.
Krulmadden
Orion pirate and captain of the smuggler ship Queen Mary. He hires Sulu and Chekov as crew.
Hammersmith
Vice admiral. High-ranking officer assigned to the space sector where Talin IV is located. McCoy punches Hammersmith in an effort to provoke him into drawing attention to the events on Talin IV. He is described as a muscular, dark-skinned man.
Sytock
Vulcan ambassador. Spock receives his credentials to speak before the Federation Council from Sytock.
Marita Llorente
Leader of a radical student group, Students for the Stars for the People, that advocates the repeal of the Prime Directive.
Alise Chavez
Lieutenant. Starfleet attorney. Assigned to defend Uhura at her court martial, she is young and inexperienced.
The Browns and The Greens
The two "major races" on Talin IV on the brink of nuclear war when the Enterprise is summoned.
The Many
Metallic insect-like drones that forced Talin IV into its nuclear catastrophe, in order to grow the algae for the One to consume. They subsist on solar energy and communicate by means of radio signal.
The One
An ancient, gigantic being that consumes planets. It travels through space surrounded by swarms of the Many.
Sam Jameson, Leonard Scott
Aliases used by James Kirk after the incidents on Talin IV.