A prison, also known as a prison house, jail, or penitentiary, was one of several forms of punishment after committing a crime in which an individual was incarcerated and deprived of various personal freedoms. A prison used for short periods of confinement was known as a jail. Prisons aboard starships and starbases were known as brigs or holding cells, which were typically used as short-term prisons, or for the containment of unprocessed fugitives.

Klingon philosophy indicated that, if taken prisoner, a Klingon should kill himself rather than be held prisoner, unless there were enemies to fight or hope of escape. (DS9: "In Purgatory's Shadow")

Tuvok once opined that if all species were as enlightened as Vulcans, there would be no need for prisons. (VOY: "Random Thoughts")

During a bizarre social experiment in 2268, during which Federation historian John Gill turned the Ekosian society into a replica of Nazi Germany, a security prison was established in the Ekosian capitol known as the Chancellery Detention Center. Here, members of the Zeon resistance movement were taken and tortured for information. (TOS: "Patterns of Force")

At one point prior to 2369, Quark was able to get Durg released from a Cardassian prison. (DS9: "The Passenger")

The Argrathi Authority used prisons that were, in reality, interactive programs that created an artificial reality filled with memories of things that never actually happened, modeled to fit each offender's personality. The Argrathi used this form of punishment as they found it more efficient and more effective than maintaining an extensive prison system. (DS9: "Hard Time")

The Dominion converted an ultritium mine, located on an asteroid, into a prison that was later referred to as Internment Camp 371. This conversion included the addition of a dome and the consolidation of the mining barracks, where each formerly had its own life support system embedded in the walls. (DS9: "By Inferno's Light")

According to the writer's guide for the episode "In Purgatory's Shadow": "The Dominion isn't big on prisons, or on taking prisoners for that matter." Those that are imprisoned are usually "an elite group of POWs, people who the Dominion is especially curious about".

The Mokra Order had a detention facility in the north-east-corner of a city on a planet in the Delta Quadrant. The prison was subterranean and equipped with a force field which could not be penetrated by sensors. Several soldiers guarded the prisoners who were held in small cells equipped with force field which could shock anyone who tried to escape. (VOY: "Resistance")

The passageway and holding cell scenes were filmed on Paramount Stage 1. 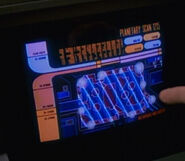 The location on a planetary scan

The interior of a holding cell

A passageway in the prison

As part of a bluff to the con artist Dala, Tuvok described the prisons of the Telsians as barely habitable, with inmates often dying of malnutrition, and torture and disease both being commonplace. (VOY: "Live Fast and Prosper")