ISBN 0671737279
ISBN 067101093X (CD)
Probe is a Pocket TOS novel, credited↓ to Margaret Wander Bonanno. Published by Pocket Books, it was first released in hardback in April 1992. The novel is a follow-up to Star Trek IV: The Voyage Home, which sees the Enterprise crew tracking down the Whale Probe as it heads into Romulan space.

From the book jacket
Star Trek – a vision of humanity's future that has captivated audiences worldwide for over a quarter century. Those audiences made Spock's World and The Lost Years, the first two Star Trek hardcover novels, nationwide bestsellers – and flocked by the millions to see Star Trek IV: The Voyage Home the most popular of all the Star Trek motion pictures.

Here now is Probe – an epic-length novel that at last picks up the story of the USS Enterprise and her crew where Star Trek IV left off. A novel that reveals the secrets behind the mysterious probe that almost destroyed Earth – and whose reappearance sends Captain Kirk, Mr. Spock, and their shipmates into unparalleled danger… and unsurpassed discovery.

In the aftermath of the visit of the mysterious probe to Earth in 2286, Starfleet is wondering what this strange visitor really was about, and who sent it. At the same time, a major political upheaval on Romulus has deposed a ruling party that has ruled for decades, and the new leadership is interested in more diplomatic relations with the Federation. With the probe headed towards Romulan space, it is a chance for the two powers to work together to understand who sent the probe, and why.

Eventually, the crew of the USS Enterprise, working with Romulan counterparts, tracks down the probe, and learns more about its background and history. Spock successfully mind melds with the probe, learning that it did not seek to be destructive to other races, instead they were so different from its creators that they were ignored as "mites" in "metal bubbles", and teaches the probe to be more aware of what it is doing to humanoid life in the galaxy as it travels, leaving the probe to continue to explore the galaxy and the detente seeking Romulans with some of the first peaceful interaction they have ever had with the Federation. 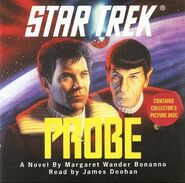 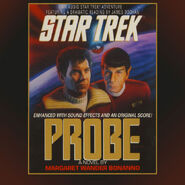 Whale Probe
The probe was capable of terraforming planets into waterworlds better suited for whale-like species; the atmospheric disturbances created on Earth were the early stages of an attempt to flood the planet.
The probe's creators were whale-like aliens with great technical skill. These aliens were engaged in battle with "mites in metal cubes", who destroyed the creators' system star after failing to defeat them in battle.