The Protostar type was a small prototype starship class launched by Starfleet during the late 24th century. (PRO: "Lost and Found")

Based on its size, Zero estimated that the ship needed at least twenty crew members, or "depending on species, thirty-seven appendages". (PRO: "Lost and Found") The distance from the ship's transporter room to warp core was at least 200 meters. (PRO: "First Con-tact")

The ship was capable of entering a range of planetary atmospheres, as well as landing on at least some types of planetary surfaces. Towards this end it was equipped with a single, large landing strut located beneath the ship's center of gravity. It was wide and sturdy enough to withstand skidding across surfaces. (PRO: "Dream Catcher")

When it was developed, the Protostar type was the fastest ship in Starfleet. The class featured tandem warp drives, one alone capable of warp 9.97, and console diagrams for transwarp drive. Normal space propulsion systems included impulse engines and RCS thrusters. (PRO: "Lost and Found", "Starstruck", "Kobayashi", "A Moral Star, Part 1")

This class of ship also featured a gravimetric protostar containment, which was powered by a protostar, and allowed it to travel considerably faster than conventional warp speed. The ship could cross over 4,000 light years in a matter of minutes, a journey that would originally take four years at maximum warp. When activated, a third nacelle would deploy from the stern of the ship while the two main nacelles were shifted to a lower angle. The engine itself was a high-priority system and consumed a large fraction of the ship's total power. (PRO: "Terror Firma", "Kobayashi")

Unusual for most Federation starships, this class had several staircases to travel between some decks, although the ship was equipped with a turbolift as well. (PRO: "Lost and Found", et al.)

The bridge had a white, black and steel color scheme, and adopted a blue LCARS software interface.

The bridge lacked a standard viewscreen typically integrated into the ship's bulkhead of most 24th century Starfleet vessels, and was instead dominated by a transparent roof dome for direct visual contact with the exterior. However, a holographic viewscreen could be summoned for hails or subspace communications. (PRO: "Terror Firma")

The ship contained a sickbay equipped with biobeds. (PRO: "Kobayashi")

This type of starship was equipped with a brig, labeled as a holding cell on the ship diagram. It was located in the starboard side of the ship. (PRO: "Starstruck", "Dream Catcher")

This type of starship had a communal mess hall, with at least three food replicators. Each replicator had two dispensing slots with a transparent sliding door in a stacked formation, with the higher one being slightly smaller than the lower one. Once the order was replicated along with a tray and any eating utensils, the door automatically retracted upward, and the tray extended outwards so that it could be removed from the slot, as a single tray virtually took up all the horizontal space within the slot. (PRO: "Starstruck")

Much of the ship's crew were berthed in the bunk room, where individuals shared bunk beds. (PRO: "Starstruck", "First Con-tact")

The ship included a holodeck available to the crew. (PRO: "Kobayashi")

This class had at least one transporter room. (PRO: "First Con-tact")

The shuttlebay was located in the lowermost section of the secondary hull. It was equipped with a vehicle replicator which could be used for the production of shuttlecraft. It also served as practical storage and deployment of ground vehicles like the Runaway, and the disembarkation and boarding point for the crew on planetary surfaces. In addition, there was a compartment where workbees were stored. There was a separate section for shuttlecraft fuel storage.

On the master systems display it is indicated that the shuttlebay is at the rear section of the secondary hull, despite clearly being shown in its forward section. (PRO: "Terror Firma") This is most likely a simple error, as most detailed Starfleet ships of this typical configuration do have their shuttlebays facing to the rear.

The ship's escape pods were located in two banks of six each on the underside of the saucer section. (PRO: "Starstruck")

Early concept art for the Protostar design was developed by John Eaves, with eventual "design and form" done by Nuen Studio and Ben Hibon, and textures by Nikie Monteleone. [1] Two years were spent designing the vessel. [2] 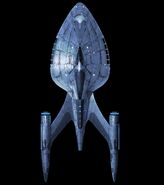