Q-Squared is a Pocket TNG novel written by Peter David. Published by Pocket Books, it was first released in hardback in July 1994.

From the book jacket
In all of his travels Captain Jean-Luc Picard has never faced an opponent more powerful than Q, a being from another continuum that Picard encountered on his very first mission as Captain of the Starship Enterprise. In the years since, Q has returned again and again to harass Picard and his crew. Sometimes dangerous, sometimes merely obnoxious, Q has always been mysterious and seemingly all-powerful.

But this time, when Q appears, he comes to Picard for help. Apparently another member of the Q continuum has tapped into an awesome power source that makes this being more powerful than the combined might of the entire Q continuum. This renegade Q is named Trelane – also known as the Squire of Gothos, who Captain Kirk and his crew first encountered over one hundred years ago. Q explains that, armed with this incredible power, Trelane has become unspeakably dangerous.

While on a mission to the Planet Terminus, three parallel Enterprises find themselves in great danger when the entity known as Trelane discovers a power unlike any other. Soon, Captain Jean-Luc Picard and his crew are caught up in a battle not only for their lives, but for the very fabric of existence itself.

"And you accuse me of arrogance? Picard, I could blast this ship out of existence if I felt like it. I could grow hair on your head. Turn your crew into embryos, force Worf to recite doggerel. I could turn your ship inside out, your reality outside in. I am not being condescending, Picard... not that I'm incapable of it, you understand, but this simply isn't one of the times. Now, what I most definitely am, Picard, is arrogant. Why? Because I have a reason to be. I have a right to be. So... mortal... what's your excuse?"

"What fascinating creatures those little humans are! And what a true tragedy that they develop into dour, humorless beings called adult Humans."
"A tragedy, yes." 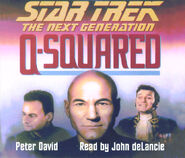 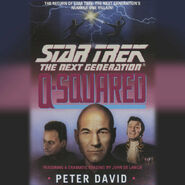 Jack Crusher
Captain of the USS Enterprise-D in this timeline). Divorced from Beverly Howard several years after the death of their son. Devised the Crusher maneuver to prevent the destruction of the USS Stargazer at Maxia Zeta. According to Trelane, he is the only Jack Crusher in the multiverse not to die during the Stargazer mission.
Jean-Luc Picard
Enterprise first officer; demoted to commander after the Stargazer court martial.
Beverly Howard
Newly-appointed chief medical officer of the Enterprise-D. Began a relationship with Picard as her marriage failed.
Wesley Crusher
Died at the age of four after he fell out of a tree trying to see his father. His death led to the breakdown of his parents' marriage.
Geordi La Forge
Beverly Howard's head nurse, had worked with Howard for several years before their assignment to the Enterprise-D; became interested in medicine because of all the medical personnel he came into contact with when he was young; grew so irritated with his VISOR that he stopped using it for several years, eventually receiving cloned eyes.
William Riker
Lieutenant commander, captured by Romulans nearly seven years earlier. Married to Deanna Troi, with an eight-year-old son named Tommy.
Data
a "human-oid" (a positronic brain in a Human body), built by Noonien Soong in collaboration with the Daystrom Institute; has an ongoing relationship with Tasha Yar.
Tasha Yar
Enterprise tactical officer
Caryn Johnson
Yeoman who runs Ten Forward.

Also the real name of actress Whoopi Goldberg, whose character of Guinan fulfills the same function in Track B.

Kira Nerys
A prisoner of the Romulans.
Worf
High-ranking officer in the Klingon Empire, with aspirations for a seat on the High Council. His parents died on Narendra III. Rescues Riker from the prison camp on Rombus III.
James Kirk
has the middle initial "R".
Lucy
Once dated Jack Crusher; after their relationship ended, she pursued Picard.
Natalie
Once dated Jack Crusher
Selan
Romulan officer; present at the attack on Narendra III, oversaw the prison facility on Rombus III.
Argyle
Enterprise chief engineer; female, speaks with a Scottish accent
Turo
Cardassian liaison to the Rombus III prison facility

"Cause and Effect"; "Parallels"; "The Squire of Gothos"; Starfleet; "Where No Man Has Gone Before"; "Yesterday's Enterprise"; "Tapestry"

In this novel, the planet was Sarona 7