In addition, Milo worked as stand-in on Voyager. He was the second unit stand-in for Gary O'Brien on the episode "Elogium". 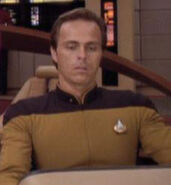