Rafael Boza is an actor who appeared twice as a background actor on Star Trek: Enterprise. He first portrayed a linguistic student in the first season episode "Broken Bow" and then Corporal Askwith in the fourth season episode "The Forge". He received no credit for both appearances.

Boza filmed the scene for "Broken Bow" on location in Malibu on 19 June 2001. 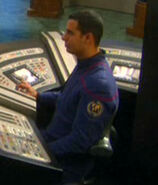 Corporal Askwith
"The Forge" (uncredited)
Add an image to this gallery
Retrieved from "https://memory-alpha.fandom.com/wiki/Rafael_Boza?oldid=2415650"
Community content is available under CC-BY-NC unless otherwise noted.