Lieutenant Jones
Ten Forward waiter
Humanoid shape
Bajoran bar patron
Randy James who is also known under his given name Randy Pflug is an actor who portrayed for eleven years the featured background part of Lieutenant Jones in Star Trek: The Next Generation and Star Trek: Deep Space Nine. He also appeared in several other roles across the series. He received no credit for his appearances except for his parts as Jones in the episodes "Dramatis Personae", "Time's Orphan", and "Chrysalis".

Beside his work in front of the camera, James was the main stand-in and photo double for Colm Meaney's Miles O'Brien. He also worked as stand-in and double for Sherman Howard in the episode "Suddenly Human", for Nick Tate on location at the El Mirage Dry Lake Bed in the episode "Final Mission", for George Hearn in the episode "First Contact", as utility stand-in in the episode "Qpid", for J.D. Cullum in the episode "Redemption", for Charles Gunning in the episode "The Perfect Mate", for Michael Canavan in "Defiant", for Chris Doyle in "Tacking Into the Wind", for Casey Biggs in "Strange Bedfellows", and for Marc Alaimo (in "Defiant" for example), Andrew J. Robinson (in "Civil Defense" for example), and James Darren (on the episodes Darren had no scenes with Meaney) on Deep Space Nine. James was the only stand-in on Deep Space Nine who worked on both the first and last days of the series. Because Richard Sarstedt was out of the country, James filled in as stand-in for Jonathan Frakes on the first two weeks of shooting Star Trek: First Contact.

One of his uniform trousers were sold off on the It's A Wrap! sale and auction on eBay and also worn by Avery Brooks. The name tag misspelled his name as "Randy Phlug". [1] According to the call sheets, Pflug was scheduled to appear as Jones in the fourth season episode "Identity Crisis" and in the fifth season episodes "Disaster" and "New Ground" in scenes in Ten Forward but was either not filmed or cut from the final episode.

James was born in Omaha, Nebraska and started his career as a stage actor in Omaha before moving to Los Angeles. In the late '80s, he was the manager of an auto parts store before making his first step into the film business.

Among his resume as a stand-in and background performer are films such as the comedy The Naked Gun: From the Files of Police Squad! (1988, with Ricardo Montalban, Leslie Hoffman, and Tiny Ron), the romance When Harry Met Sally... (1989, with Franc Luz), the thriller The Hunt for Red October (1990, with Timothy Carhart, Daniel Davis, Ned Vaughn, and Gates McFadden), the comedy What's Eating You? (2000, with Leslie Ackerman, edited, produced, and directed by Jonathan West, and script supervising by Trisha Burton), and the drama The Dying Gaul (2005), on which he worked as stand-in for Peter Sarsgaard). In the 1995 science fiction television movie Alien Nation: Body and Soul, James portrayed a Human cop. The film also features Star Trek performers Gary Graham, Eric Pierpoint, Michele Scarabelli, Leon Russom, Tiny Ron, Glenn Morshower, Jeff Austin, Miguel Perez, Marva Hicks, and fellow DS9 regular Ivy Borg. 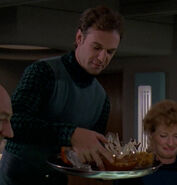 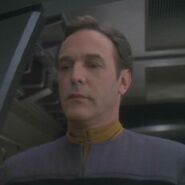 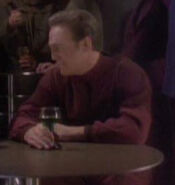 (All uncredited unless otherwise noticed)