Tactical sensors, deflector shields
The Raptor-class scout vessel was a small battle cruiser utilized by the Klingon Empire during the mid-22nd century.

The Klingon Raptor was a type of scout vessel first encountered by the Vulcans sometime prior to 2151. As such, the vessel was listed in the Vulcan database, however, much of the information on the class remained classified.

The first Earth encounter with a Raptor came in 2151, when the Starfleet ship Enterprise NX-01 stumbled across the disabled IKS Somraw within the atmosphere of a class 9 gas giant, where it was being crushed by the planet's brutal atmospheric pressure.

With the crew apparently incapacitated, an Enterprise boarding party worked to restore the ship's propulsion systems and regain altitude. Though eventually successful, the boarding party became trapped on the ship, allowing them time to explore the interior of a Klingon vessel – the first Humans to ever do so. (ENT: "Sleeping Dogs", "Judgment")

Schematics for the Raptor-class also appeared in Daniels' 31st century database. (ENT: "Shockwave", "Future Tense") Upon viewing the Raptor, among other Klingon vessel classes, Malcolm Reed noted that there were "schematics on half a dozen different Klingon ships," but was reminded by Jonathan Archer that acquiring information on those ships was not the reason why they were accessing the database. (ENT: "Shockwave")

According to the Vulcan database, this vessel was identified as a "scout vessel", but was later recalled by Jonathan Archer to be a "battle cruiser". (ENT: "Sleeping Dogs", "Marauders")

The outboard plan of the Raptor utilized the same basic bird design that would be further incorporated into a classic and noble warship lineage. It was similar in design lineage as the D5-class battle cruiser and Bird-of-Prey variant.

The bridge module is separated from the main body by a thin neck that flares out into the up-swept wings, which contain the warp nacelles. (ENT: "Sleeping Dogs")

The Raptor's outer hull was reinforced with a type of coherent molecular alloy made it capable of withstanding atmospheric pressure of 15,000 GSC, or that found in a class 9 gas giant, at an approximate depth of two kilometers. Overall, the Raptor's hull was twice as thick as that of Starfleet's NX-class. (ENT: "Sleeping Dogs")

The impulse engine was located, like most Klingon starship classes, at the extreme aft section of the main structure. The various components of the propulsion system included a fusion manifold as well as port and starboard fusion injectors. (ENT: "Sleeping Dogs")

The Raptor-class was equipped with shields. The tactical systems included tactical sensors, disruptor arrays and at least six automated photon torpedo ports that could be loaded simultaneously. These including at least one torpedo port on the ship's ventral side. (ENT: "Sleeping Dogs") The primary weapon array was located on the dorsal side of the ship. (ENT: "Sleeping Dogs" display graphic)

Like its D5-class counterpart of the same era, the Raptor was outfitted with standard multi-spectral sensors similar to those used on Starfleet's NX-class. (ENT: "Judgment")

The Raptor class was not equipped with any form of escape pod. (ENT: "Sleeping Dogs")

The Raptor-class was comprised of at least four decks; it had at least one docking hatch located on the port side, deck 2, red sector. (ENT: "Sleeping Dogs")

Despite what was stated in dialogue, which suggested that several locations visited on board the Somraw were dispersed throughout the ship, visual evidence suggests that the docking port, bridge, and galley were all located on the same deck. Case in point, Sato stated that the galley was on "deck 4, blue sector," (per the schematic she read) however, the scene where Bu'kaH attacked Reed outside the galley was well within earshot of T'Pol and Sato, who were still on the bridge. Additionally, the docking port, which was located not far from the point where Sato read the signage indicating that they were "deck 2, red sector," was located adjacent to the galley, suggesting that all three locales were actually located on the same deck.

The main bridge was located in the "head" of the forward section of the vessel. The configuration of the darkened main bridge design of the Raptor-class scout vessel was shared with many contemporary Klingon bridge layouts, including the D5-class and Klingon Bird-of-Prey.

Along the port side of the bridge were several stations, each assigned to a specific task, including an engineering console and a tactical console. Additional stations were also located on the starboard side, including a station that displayed structural integrity and helm. (ENT: "Sleeping Dogs")

The "reactor pit" was located one deck below the bridge, in the ship's "neck". It had at least two entryways and two free-standing work consoles. (ENT: "Sleeping Dogs") 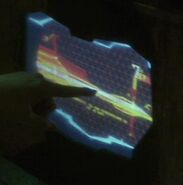 The galley was located on deck 4, blue sector; a targ pit and cold storage unit were located opposite of the entryway. (ENT: "Sleeping Dogs") 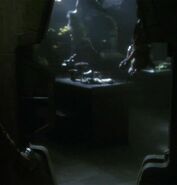 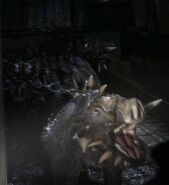 The word "raptor" means "bird of prey". However, in "The Expanse", the vessels which were referred to as the Bird-of-Prey were of a distinctly different design. It is of note that the original reference to the term "bird of prey" was also mentioned in the dialogue from the same episode in which the Raptor appeared.

The Raptor-class was the first new Klingon ship to be established in Star Trek in roughly a decade. The exclusive use of the 22nd century as the predominant setting of Star Trek: Enterprise allowed the show's producers opportunity to introduce a new Klingon craft. Due to the relative earliness of the era in which the ship was to be portrayed as active, it had to seem more primitive than the battle cruisers and Birds-of-Prey depicted previously, even though it meanwhile had to be recognizably Klingon. (Star Trek: The Magazine Volume 3, Issue 2, p. 42)

Several designs were considered when first establishing the Raptor, which was originally scripted to be a small scout ship. According to John Eaves, the designing of the ship went through "quite a gamut of shapes." These were done as a series of quick sketches by Eaves himself, for Herman Zimmerman to show the producers. He explained, "Originally, it was supposed to be a shuttle, then it got a little bigger as it went on. My thumbnails go from little two-man sized things to four-guy ships, up to the one they chose, which I figure is like a 12-guy ship. It is lightly based on the Bird-of-Prey, but more on the D-7." (Star Trek: The Magazine Volume 3, Issue 2, p. 42)

The concept design chosen by the producers was a fairly detailed sketch that clearly showed the Raptor as a 22nd century ship. (Star Trek: The Magazine Volume 3, Issue 2, p. 42) Despite this, John Eaves had, by now, a relatively clear idea of how he could continue making it look more primitive than the usual variety of Klingon vessels. (Star Trek: The Magazine Volume 3, Issue 2, pp. 42 & 44) Because the Raptor was clearly based on the D7 class, Eaves was able to work backward from a familiar design. Since his 22nd century design ethic involved him often wanting to show wings as being state-of-the-art at that time (even if occasionally aerodynamic), Eaves instantly had a sense of how to modify the architecture of the Raptor without interfering with the basic shapes. He consequently accentuated the wings more than they are on the D7 class, which had more body than wings. (Star Trek: The Magazine Volume 3, Issue 2, p. 44)

After the chosen concept sketch was selected by the producers, John Eaves passed the appropriate drawing to Doug Drexler. He produced only a single view of the craft, constructing it as a CG model with LightWave 3D. (Star Trek: The Magazine Volume 3, Issue 2, p. 42) Drexler continued refining the design as he built it. He proceeded on the basis that his job wasn't to make any changes to the shape, but to reinforce the general impression which the producers were interested in creating. Drexler felt the Raptor had "a PT boat-Civil War ironclad quality to it." He added, "John's sketches suggested a trussed and cabled quality that I was sure to include in the model. Those distinctive touches helped to date it. The coloration is metallic, but suggests the gray tones of Matt Jefferies' original battle cruiser. We are still a way off from the murky Japanese submarine rusty-green of later years," which could have also been the color of verdigris. (Star Trek: The Magazine Volume 3, Issue 2, p. 44)

John Eaves was thrilled with Doug Drexler's CGI modeling of the Raptor, thinking it "compliments" his design in every possible way. After Drexler completed his work on the CGI design, the model was sent to Foundation Imaging, where it was completed in minute detail by modeler Pierre Drolet and his supervisor, Rob Bonchune. They added damage to the ship, which was called for by the script of "Sleeping Dogs". (Star Trek: The Magazine Volume 3, Issue 2, p. 44) The length established for the CGI model, as scaled in relation to the other models created for the series, was 145 meters.

"Sleeping Dogs" was the only time that the CGI model of this class appeared on-screen. However, it was also seen in the title menu of the Star Trek: Enterprise Season Two DVD.

In the 25th century timeline of Star Trek Online, the Raptor-class was one of three core ship types used by the Klingon Defense Force and its allies, the other two being the Bird-of-Prey (also known as the Raider) and the Battle Cruiser. Raptors were less maneuverable than Raiders, but more durable.