The Rawcliffe Pewter Corporation was an American metalworking company that was founded in North Providence, Rhode Island in 1903. It produced high quality bronze, silver and pewter (a lead-tin alloy) parts for over a century.

The company began to manufacture complete ornaments, figurines and sculptures under its own name in 1974.

The popularity of FASA's Star Trek starship gaming models attracted the attention of Rawcliffe which also began to release Star Trek miniatures for the Star Trek: The Role Playing Game in 1988.

In cooperation with FASA, Rawcliffe started to release high quality solid pewter gaming pieces with the hexagonal gaming stand now as an integral part of the model. Thirteen of FASA's models were re-made as Rawcliffe's "SS" (Star Ship) series. FASA was mentioned as co-licensee both on the clear plastic packaging boxes and on the bottom of the stand, while simultaneously following FASA's numbering.

When FASA lost its license in 1989, Rawcliffe renegotiated a separate license with the Paramount Marketing and Licensing Department and acquired the molds for the models from FASA. FASA had geared up to add Star Trek: The Next Generation figures to their product line but Rawcliffe eventually released these in 1992 after FASA was unable to. These former FASA miniatures became the basis for Rawcliffe to include larger scale starships, figurines and sculptures in their product line.

In 1991, Rawcliffe started anew with their "RF" (simply standing for "Rawcliffe") series (now including, besides the figurines and sculptures, larger scaled ship models without the FASA pedigree as well), but due to their new licensing agreement, the company produced canon ships exclusively. This meant that the five non-canon ships they had released in their original 1988 "SS" series (SS2508, 25010, 2513, 2516 & 2529) were not reissued by the company, resulting in them becoming sought-after rarities by collectors afterwards. With all references to FASA and their gaming miniature origins dropped (though many retained their hexagonal gaming stands), these models were now packaged in Rawcliffe's blank white carton boxes which displayed only Rawcliffe's logo. The models in this series came accompanied by a small colored carton nameplate – blue for the starships and burgundy red for the individual figurines – which emphasized that they were being released as decorative display items only.

In 1994, Rawcliffe expanded on its miniature lines with the addition of mugs and key chains to its Star Trek product lines.

A number of the company's original starship and space station miniatures and key chains were sculpted by Mark Eliot Schwabe, an American artist. [1] Sandra Garrity and Julie Guthrie were among the sculptors who created the figurines.

The company's licensing to release Star Trek-based products concluded in 1999. 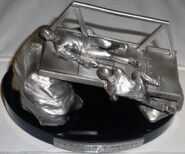 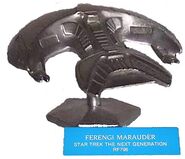 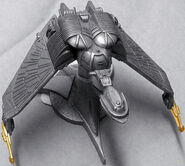 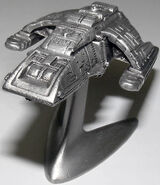 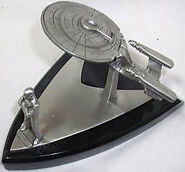 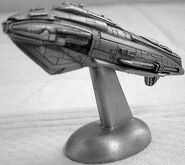 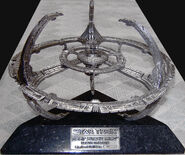 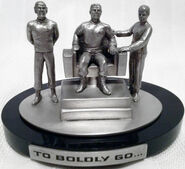 Key chains
Add an image to this gallery

Mugs
Add an image to this gallery

Retrieved from "https://memory-alpha.fandom.com/wiki/Rawcliffe?oldid=2473939"
Community content is available under CC-BY-NC unless otherwise noted.