Reading Rainbow was a television show broadcast by Public Broadcasting Service (PBS) that ran from 1983 to 2006, spanning 21 seasons and 155 twenty-minute episodes. Hosted by LeVar Burton, the goal of the show was to inspire a love of books among young viewers. Burton continued to host the show throughout his time playing Geordi La Forge.

Of particular relevance to Star Trek was the first episode of season 6 titled "The Bionic Bunny Show". First broadcast on 15 August 1988, Burton took the viewers on a tour exploring the various behind-the-scenes aspects of shooting a Star Trek show. Produced during the shooting of the TNG season 1 episode "Symbiosis" (also featuring discussion of a model from "When The Bough Breaks"), it stands among the first "making-of" documentaries of TNG (the very first according to Larry Nemecek [1]), including interviews with Robert Legato and a blooper reel. [2] This was the first time bloopers from TNG were broadcast.

In 2012, the Star Trek segment of the episode was included as a bonus feature in the TNG Season 2 Blu-ray set. 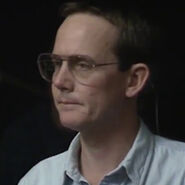 Retrieved from "https://memory-alpha.fandom.com/wiki/Reading_Rainbow?oldid=2310813"
Community content is available under CC-BY-NC unless otherwise noted.