Red Horton is a stuntman, stunt actor, and stunt coordinator who performed stunts in episodes of Star Trek: Deep Space Nine and Star Trek: The Next Generation. He received no credit for these appearances.

Horton has also worked in several other departments such as a special effects artist for the film Miami Beach Cops (1992), as a location manager for the film Attention Shoppers (2000), and as a transportation coordinator for the film Return to Sender (2004). Horton has also directed several productions in the second unit such as the films L.A. Heat (1989) and CIA II: Target Alexa (1994, with John Savage and Branscombe Richmond). 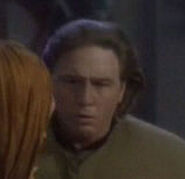 Retrieved from "https://memory-alpha.fandom.com/wiki/Red_Horton?oldid=2700674"
Community content is available under CC-BY-NC unless otherwise noted.