Reggie Nalder (4 September 1907 – 19 November 1991; age 84) was a Vienna-born actor. Born as Alfred Reginald Natzler in what was once Austria-Hungary, he played Ambassador Shras in the Star Trek: The Original Series second season episode "Journey to Babel". He filmed his scenes on Friday 22 September 1967 and Monday 25 September 1967 at Desilu Stage 9.

He guest-starred in several other television series, including the premiere of the original Battlestar Galactica. His film roles include that of the Soviet brainwasher Dimitri Gomel in the 1962 political psycho-drama The Manchurian Candidate, which also had work for TOS guest actors Leslie Parrish, Whit Bissell, and James Gregory. His most famous film is probably Alfred Hitchcock's The Man Who Knew Too Much (1956). He also made a small appearance in Italian director Federico Fellini's Casanova in 1976.

In the 1979 television adaptation of the Stephen King novel Salem's Lot, Nalder played the role of Kurt Barlow, the lead vampire. It co-starred his fellow TOS guest stars David Soul, Elisha Cook, Julie Cobb and Barbara Babcock. He was also well known for his role as a sadistic witch burner in the 1970 horror film Mark of the Devil. 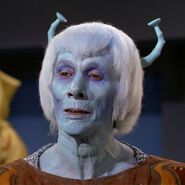