The novelization of "Relics" is an adaptation of "Relics", written by Michael Jan Friedman. A Pocket TNG novel published by Pocket Books, it was first released in November 1992.

From the book jacket
In the tradition of Unification, here is the story that fans of the original Star Trek series and Star Trek: The Next Generation have been clamoring for – Montgomery Scott's return to the Star Trek universe and his encounter with the crew of the USS Enterprise (NCC-1701-D).

Missing in space for seventy-five years, Scotty manages to survive against incredible odds, only to be found by the crew of the starship Enterprise-D. Though rescued, Scotty soon finds himself lost in a world that he barely recognizes, a world that has passed him by…

But the adventure is not over for Captain Scott who must do the impossible when the new Enterprise faces a very old danger in a remote sector of space. This time, Captain Picard and his crew will need more than all of their courage and all of their skills to save the great starship from destruction. This time, they will need a miracle worker. 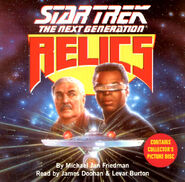 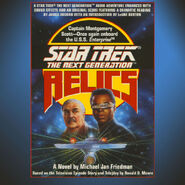