Remco Industries, Inc. was an American toy company which was established in the 1940s in New Jersey. The name "Remco" was derived from the words "remote control". The company filed for bankruptcy in 1971 and was acquired by Azrak-Hamway International in 1974.

From 1968 to 1971, the company produced many Star Trek-themed games, toys, and "role-playing" accessories. These were among the first licensed toys ever produced for the franchise.

However, none of the items released in this period had anything to do with Star Trek at all, instead they were all repackaged toys that were previously released by Remco, particularly those from their "Hamilton Invaders" toy line. Repackaged in boxes that featured Star trek imagery with the expression "astro" put in front of the original product name to make them "spaceworthy", these toys, endowed with Star Trek stickers, were sold as genuine articles, a questionable industry practice known as "label slapping".[1] Former Star Trek production staffer, but then "trekkie", Doug Drexler spoke for all his contemporaries when he commented, "They were toys I wouldn't buy. I mean they had nothing to do with Star Trek. I'm not stupid. They thought I was, I guess.(…)It's, like, ridiculous.(…)[It] [j]ust pissed me off.(…)To me that was very upsetting, because I put a lot of time into learning all about the show, reading The Making of Star Trek. I knew what the props really looked like." (The Toys That Made Us)

The practice was exemplary of the way the franchise viewed its Star Trek property at the time, as observed by author Stephen Edward Poe in later years, "Desilu [and its successor Paramount Pictures] treated the whole idea of Star Trek licensing and merchandising with immense disdain. It was as if studio executives felt greatly annoyed at having to even discuss the subject at all (…) – some sort of corporate aberration – and licensed merchandise emerged only slowly and with, apparently, great reluctance." (A Vision of the Future - Star Trek: Voyager, pp. 45-46)

In response to the success Mego Toys had with their Star Trek toy lines, new owner Azrak-Hamway subsequently re-released many of these toys under the Remco brand from the mid-1970s onward, alongside a number of new products, this time actually Star Trek-related to some extent in some cases, such as the 1976 "Remco Controlled Space Flight Enterprise". However, in the Netflix documentary series The Toys That Made Us, one of these later items, the Remco-inspired "Star Trek Spock Space Fun Helmet" from Enco Company, was singled out in particular for scathing ridicule, being coined by one toy expert as "[e]asily the most hilarious Star Trek toy ever released". Nonetheless, the Remco toys did at their time reasonably well, because there was so little else available on the market for fans, whereas a segment of the collectors scene still hunt for these now rare items, precisely for their quirkiness.

After a long hiatus, a number of "Steel Tec" building kits were released in the 1990s under the Remco brand. One more licensed Star Trek product was manufactured: 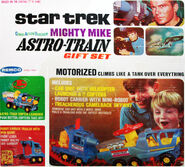 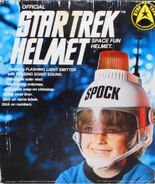 The history and development of the Remco Star Trek line was featured in the "Star Trek" episode of The Toys That Made Us in 2018.