Richard Allen is an actor who appeared as Kentor in the Star Trek: The Next Generation third season episode "The Ensigns of Command", and the Tamarian first officer in the fifth season episode "Darmok". For his appearance in "Darmok", Allen filmed all of his scenes on 25 July 1991 on Paramount Stage 9 along with Paul Winfield, Norman Hunte, and Terry Noel.

Allen had a few television guest spots in the late '80s and early '90s. He also had small roles in a number of movies, as well as doing some voice work later on. 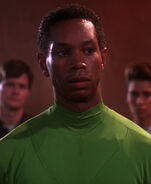 Kentor
TNG: "The Ensigns of Command" 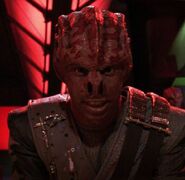 Retrieved from "https://memory-alpha.fandom.com/wiki/Richard_Allen?oldid=2525301"
Community content is available under CC-BY-NC unless otherwise noted.