Enterprise security guard
Andorian inmate
Richard "Dick" Geary (15 July 1925 – 15 May 2000; age 74) was a stuntman and stunt actor who appeared in several episodes of Star Trek: The Original Series. He filmed his scene for "The Paradise Syndrome" on Friday 14 June 1968 on location at the Franklin Reserve, his scene for "Is There in Truth No Beauty?" on Wednesday 24 July 1968 at Desilu Stage 9, his scenes for "Wink of an Eye" on Monday 23 September 1968 at Stage 9, and his scenes for "Whom Gods Destroy" between Tuesday 15 October 1968 and Tuesday 22 October 1968 at Stage 10.

According to call sheets, Geary filmed a scene as an Enterprise security guard in the episode "For the World is Hollow and I Have Touched the Sky", but his appearance ended up as a deleted scene. [1]

Geary co-founded the very first stunt union, the Stuntmen's Association of Motion Pictures, with fellow stuntman Loren Janes in 1961. He performed stunts on such television shows as Perry Mason, Peter Gunn, Voyage to the Bottom of the Sea, Mannix, and Kolchak: The Night Stalker. He also performed in such films as It's a Mad Mad Mad Mad World, The Great Race, Bullit, The Love Bug, and The Sword and the Sorcerer. 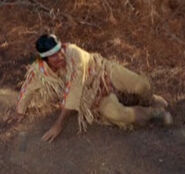 Security guard
TOS: "Day of the Dove", "Wink of an Eye"
(uncredited)