Rick Ryan is an actor who worked as background actor on several episodes of Star Trek: The Next Generation and Star Trek: Deep Space Nine. He received no credit for his appearances but was identified by the name tag of his costume from the episode "Attached" which was later sold off on the It's A Wrap! sale and auction on eBay. [1]

His first acting job following his move to Los Angeles, was in 1992 when he worked on the drama Newsies, along with Gabriel Damon, Kevin Tighe, William Boyett, Shay Duffin, and Frank Novak. Further acting work includes the game show Pyramid, episodes of The New WKRP in Cincinnati and Angel, and a music video for rapper MC Hammer. Today, Ryan has been working as bartender in Page, Arizona. 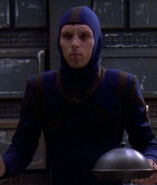 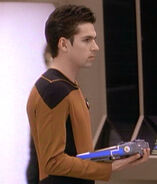 Retrieved from "https://memory-alpha.fandom.com/wiki/Rick_Ryan?oldid=2415006"
Community content is available under CC-BY-NC unless otherwise noted.