Rick Worthy (born 12 March 1967; age 53) is an actor who has played six characters across three Star Trek spin-off series and one feature film. Among his guest roles was the recurring role of the Xindi-Arboreal Jannar in Star Trek: Enterprise. He also voiced a character in the video game Star Trek: Klingon.

Worthy and Dean Stockwell appeared in the Ronald D. Moore-produced update of Battlestar Galactica, each playing one of the twelve humanoid Cylon models. Worthy also appeared in Stargate SG-1 as a rebel Jaffa leader named K'tano. Starting in 2015, he starred in Syfy's The Magicians and Dean Henry Fogg. 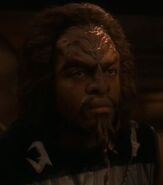 Kornan
DS9: "Soldiers of the Empire" 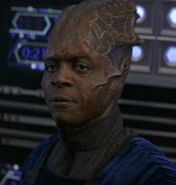 Retrieved from "https://memory-alpha.fandom.com/wiki/Rick_Worthy?oldid=2563595"
Community content is available under CC-BY-NC unless otherwise noted.