Bueno served as paratrooper in the US Army and is also a Vietnam veteran with combat experiences. He is a skilled stuntman and studied acting at the San Diego State University and the Van Mar Academy. Together with Rony Traylor he founded the talent agency "The Wild Bunch of Hollywood" in 1995, a unique talent database for actors with special looks and special abilities.

His television appearances include series such as Night Court, In Living Color, Hangin' with Mr. Cooper, One Day, The West Wing, Passions, The Handler (2003, with David Q. Combs), and The Shield (2004, with Michael Jace, Jay Karnes, Benito Martinez, and Robert Alonzo).

Bueno lost his battle against cancer on 4 June 2016 at the VA Hospital in San Diego, California. 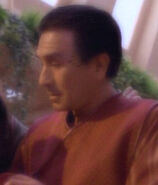 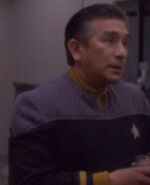 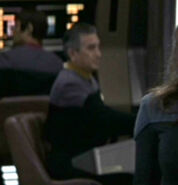 Retrieved from "https://memory-alpha.fandom.com/wiki/Rico_Bueno?oldid=2663066"
Community content is available under CC-BY-NC unless otherwise noted.