Riva's Chorus was a trio of telepaths who had lived with Riva since his childhood and who were extraordinarily attuned to his thoughts and emotions. Riva himself was deaf, a hereditary condition of the ruling dynasty of his planet, Ramatis III, and the chorus interpreted his thoughts and spoke on his behalf.

The trio each spoke for different aspects of Riva.

The bond between Riva and his Chorus was nearly symbiotic. They were his good friends and the relationship between his family and their ancestors, who served the same role, stretched back generations.

In 2365, Riva's Chorus was murdered on Solais V when he attempted to bring two warring factions together. The loss of his communication abilities and dear friends was nearly a crippling blow for Riva and he felt responsible for their deaths. Ultimately, however, he resolved to finish the task and dedicated himself to bringing peace to Solais V. (TNG: "Loud As A Whisper") 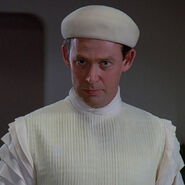