Robert Ford is an actor who appeared as a background actor in several episodes of Star Trek: Deep Space Nine and Star Trek: Voyager.

Under his artistic name Robert Paul, he appeared in the television crime thriller Naked Ambition (2005). Further credits include the drama Tears of a Clown (2005) and the action film Enter the Diamond (2017). [1] 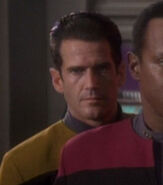 Deep Space 9 officer
DS9: "A Man Alone", "Captive Pursuit", "The Nagus", "The Forsaken", "In the Hands of the Prophets"
(uncredited)

Holographic waiter
VOY: "The Killing Game"
(uncredited)
Add an image to this gallery

Retrieved from "https://memory-alpha.fandom.com/wiki/Robert_Ford?oldid=2414155"
Community content is available under CC-BY-NC unless otherwise noted.