Robert "Bob" Herron (born 23 September 1924; age 95) is a Hollywood stuntman and actor. He served as a stunt double for Jeffrey Hunter in the first Star Trek: The Original Series pilot, "The Cage", also featuring in the same uncredited role as part of archive footage in "The Menagerie, Part II". Herron appeared, uncredited, as a USS Enterprise crew member named Sam in "Charlie X". He later played the Excalbian recreation of the legendary Kahless the Unforgettable in "The Savage Curtain".

As an actor, Herron had small roles in a number of films, including Gun Fury (1953), Movie Movie (1978), and City Heat (1984). He also appeared in Stanley Kramer's The Domino Principle (1977), which also featured Majel Barrett, but Herron is a stuntman first and an actor second. He has performed stunts on over 200 films and television shows, and has done so for fifty-five years. The films he worked on include The Ten Commandments (1956), Spartacus (1960), The Wild Bunch (1969), Shaft (1971), Rocky (1976), Poltergeist (1982), The Untouchables (1987), and L.A. Confidential (1997). His television work includes The Green Hornet, The Streets of San Francisco, and The Rockford Files. Unfortunately, he received no on-screen credit for much of his work. 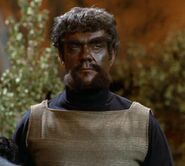 Kahless the Unforgettable
TOS: "The Savage Curtain"
Add an image to this gallery

Herron has done stunt work for numerous films and TV shows which feature principal cast members and frequent or major guest actors from the various Star Trek series and films. These include:

Herron has also served as stuntman on more than one film featuring one or more of the following Star Trek guest actors:

Retrieved from "https://memory-alpha.fandom.com/wiki/Robert_Herron?oldid=2417735"
Community content is available under CC-BY-NC unless otherwise noted.