Robert Ito (born 2 July 1931; age 89) is an actor who appeared in episodes of Star Trek: The Next Generation and Star Trek: Voyager.

He is best known for his co-starring role as Sam Fujiyama in the 1970s TV show Quincy M.E. with Jack Klugman. He also co-starred alongside Peter Weller as Professor Hikita in The Adventures of Buckaroo Banzai Across the 8th Dimension and appeared in an episode of Highlander in 1994 titled "The Samurai" along with Stephen McHattie. 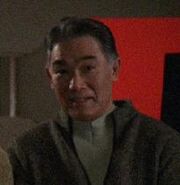 Retrieved from "https://memory-alpha.fandom.com/wiki/Robert_Ito?oldid=2525344"
Community content is available under CC-BY-NC unless otherwise noted.