Robert O'Reilly (born 25 March 1950; age 69) is an actor best known for his portrayal of Klingon Chancellor Gowron on Star Trek: The Next Generation and Star Trek: Deep Space Nine.

His first Star Trek appearance was in 1989 and his last was in 2003. He played Gowron for nine years. When he first auditioned for the role, he attempted to portray him as cold and calculating, but feeling this was not as successful, at his next audition, he flared his eyes aggressively (which Gowron has now come to be known for) and successfully obtained the role.

In addition, O'Reilly appeared as Kavok, the antagonist of the Star Trek: The Next Generation - A Klingon Challenge interactive board game.

O'Reilly is a close friend of J.G. Hertzler. The two appeared in Douglas: The Christmas Movie, and often attend conventions dressed up as Gowron and Martok. [1] 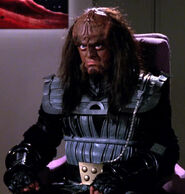 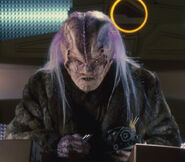 Kago-Darr
ENT: "Bounty"
Add an image to this gallery

Retrieved from "https://memory-alpha.fandom.com/wiki/Robert_O%27Reilly?oldid=2416650"
Community content is available under CC-BY-NC unless otherwise noted.