Robin Van Sharner (died 6 October 2015) was an actor who appeared in episodes of Star Trek: The Next Generation and Star Trek: Voyager.

For the TNG fifth season episode "Silicon Avatar", he filmed his scenes on Wednesday 7 August 1991 on location at the Golden Oak Ranch and can be seen as the elderly colonist who died together with Carmen Davila. For the VOY third season episode "Warlord", Van Sharner filmed his scene on Wednesday 4 September 1996 on Paramount Stage 16 and is listed as "Autarch (Ilari)" on the call sheet. His costume from "Warlord" was later sold off on the It's A Wrap! sale and auction on eBay. [1]

On Wednesday, 15 July 1981, Van Sharner worked as second unit stand-in on the science fiction film Tron. On the call sheet, his name was misspelled as "Vontscharner". Also on set this day were stunt performers Al Jones, Glenn R. Wilder, and Vince Deadrick under stunt coordination by Dick Butler.

Van Sharner was featured as an airline passenger and worked as stand-in for Martin Landau on the 1997 comedy B*A*P*S, with Luigi Amodeo and Debra Wilson. In 1999 he worked as office production assistant on the drama The Joyriders and in 2001 he worked again as stand-in for Martin Landau on the drama The Majestic, with David Ogden Stiers, Mario Roccuzzo, Frank Collison, Ken Magee, and Earl Boen, and had a featured part as Grumpy in the thriller Vanilla Sky, with Armand Schultz, Robertson Dean, Ray Proscia, Mark Bramhall, Michael Kehoe, and Andrei Sterling. 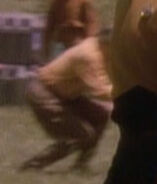 Farran
VOY: "Remember"
(uncredited)
Add an image to this gallery

Retrieved from "https://memory-alpha.fandom.com/wiki/Robin_Van_Sharner?oldid=2415108"
Community content is available under CC-BY-NC unless otherwise noted.