View source
watch 02:07
Spider-Man: No Way Home Trailer Dropped - The Loop
Do you like this video?
Play Sound
Real World article
(written from a Production point of view)
For the rock creature in the Animated Series, please see rock beast.

The Rock Man was a creature who attacked William Shatner's Captain Kirk on Sha Ka Ree in the original version of Star Trek V: The Final Frontier. This creature and the complete scene were later cut from the final film because the scene was thought too poor to include in the film.

Tom Morga, the stuntman who portrayed the Rock Man, talked about this scene and the costume in the special feature "Tom Morga: Alien Stuntman" on the 2009 box release of Star Trek: Original Motion Picture Collection. According to Morga, a flame extender with a gas jet was put into the costume so that the Rock Man could have flames come out of his mouth. 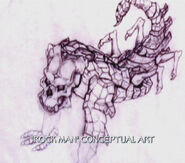 An early concept for the Rock Man 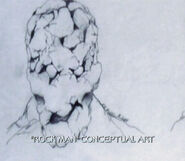 A concept for the Rock Man 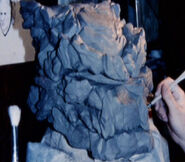 The head for the Rock Man

The Rock Man in the deleted scene
Community content is available under CC-BY-NC unless otherwise noted.
Advertisement