Arrants was born in Los Angeles, California, is two times divorced and has one son. In 1979 he won a Soapy Award as most exciting new actor for his performance in Search for Tomorrow where he played Travis Tourneur Sentell between 1978 and 1984. Arrants has also played recurring roles in the soap operas Another World (1977), The Young and the Restless (1986-1988), and Days of Our Lives (1985). 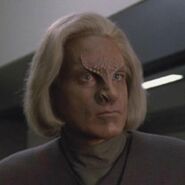 Daleth
VOY: "Living Witness"
Add an image to this gallery

Retrieved from "https://memory-alpha.fandom.com/wiki/Rod_Arrants?oldid=2741640"
Community content is available under CC-BY-NC unless otherwise noted.