Holloway was also James Doohan's (and the male guest star's) stand-in and took over as Shatner's stand-in when Eddie Paskey left the show.

His Star Trek appearances are Holloway's only known screen credits. Very little is known about life before or after the series. He discontinued acting after the series ended, and left Los Angeles. [1] 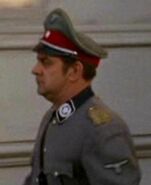 Illusory Roger Lemli
(TOS: "The Empath")
Add an image to this gallery

Retrieved from "https://memory-alpha.fandom.com/wiki/Roger_Holloway?oldid=2416941"
Community content is available under CC-BY-NC unless otherwise noted.