Roma Lee Tracy (3 January 1939 – 15 March 2016; age 77) appeared as a background actress in two Star Trek productions. She first portrayed one of the silver tube amazette alien dignitaries in Star Trek VI: The Undiscovered Country and one year later a literary reception guest in the Star Trek: The Next Generation fifth season episode "Time's Arrow". As a background actress she received no credit for her appearances.

Tracy was born as Roma Lee Johnson and was married to Patrick Stewart's regular stand-in Dennis Tracy between 1968 and 1995.

She died peacefully at an acute care center in Vancouver, Washington on 15 March 2016 at the age of 77. 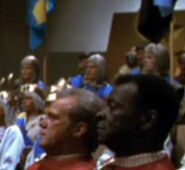