Romulan disruptors were a type of hand-held disruptor weapon used by Romulan officers or as mounted weapons utilized on board starships serving the Romulan Empire. They were first seen in the 23rd century when the USS Enterprise entered the Romulan Neutral Zone to steal a cloaking device. (TOS: "The Enterprise Incident")

During the 24th century, the Romulans were using a sleeker designed disruptors that featured various power settings as well as an overload setting. (TNG: "The Next Phase", "Face of the Enemy"; DS9: "The Search, Part I")

The Romulans also had two larger versions referred to as disruptor rifles. These versions were capable of firing a more powerful beam than their smaller counterparts. (TNG: "Unification I", "Unification II"; DS9: "Improbable Cause")

In 2369, Doctor Beverly Crusher was shot from a close distance with a Romulan disruptor but was frozen in time due to several temporal fragments. When the away team, including Captain Picard, Data, Geordi La Forge, and Deanna Troi, was able to return the normal timeline, Troi saved Crusher by pushing her out of the way. The Romulan officer was surprised when time resumed normally as he was not shooting at Crusher. His target had been a female alien who had been posing as a Romulan, and was capable of changing her location during the momentary pause of time. (TNG: "Timescape")

Hull mounted disruptors left behind residual antiprotons, whose decay could be used to date when the weapon was fired. (TNG: "Face of the Enemy")

Rick Sternbach – the weapon's designer – listed the (24th century) Romulan disruptor pistol as one of his favorite creations, describing it as "close to [his] heart". [1]
The pistol that appears in Star Trek was mentioned in Star Trek - The Art of the Film as having its barrels designed to wrap around like a serpent, as well as Nero's teral'n. The final prop did not have twisted barrels however. 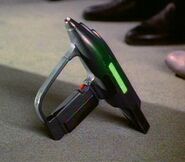 Firing forward disruptors
Add an image to this gallery

In TNG: , Unification II (episode), Spock aims a disruptor rifle at Sela, saying apologetically that he doesn't know much about their settings. According to the novelization of the episode, Sela is prompted to lay down her weapon by the knowledge that Romulan disruptors have no stun setting: high settings will vaporize the target, while lower settings will cause his or her organs to explode.

Retrieved from "https://memory-alpha.fandom.com/wiki/Romulan_disruptor?oldid=2234920"
Community content is available under CC-BY-NC unless otherwise noted.