Start a Wiki
Multiple realities
(covers information from several alternate timelines)
"The matter of trespass into Romulan space is one of galactic import, a violation of treaties."
– Romulan Commander, 2268 ("The Enterprise Incident")

Romulan space or Romulan territory was the region of space occupied or territory claimed by the Romulan Star Empire. The Romulans believed their destiny to be the domination of the entire Milky Way Galaxy. (TNG: "The Enemy")

An expansionist power, the Romulans followed the precept of unlimited expansion. (ENT: "The Aenar") The Empire claimed vast tracts of space that were outside its effective authority, for example Sector 25434. These claims were not recognized by other governments. (TNG: "Tin Man") Romulans seldom gave up territory once they had seized it. (DS9: "The Reckoning")

In an alternate timeline caused by the death of Gabriel Bell in 2024, Romulan transmissions were detected in the vicinity of Alpha Centauri in 2371, suggesting Romulan Space extended at least that far. (DS9: "Past Tense, Part I") 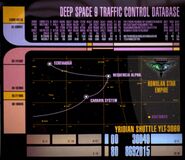 The Romulan Neutral Zone
Add an image to this gallery

The Romulan Star Empire maintained borders with many notable powers including the Klingon Empire and the Romulan-Klingon border, and with the Cardassian Union at the Romulan-Cardassian border. (TNG: "Redemption II"; DS9: "In the Pale Moonlight")

The Federation-Romulan border was defined by a fixed border known as the Romulan Neutral Zone. (TOS: "Balance of Terror"; DS9: "In the Pale Moonlight") There was also a distant Romulan border near the outer edges of the Alpha Quadrant, in a region of space where Federation starships operated on deep space missions in the 2370s. (VOY: "Message in a Bottle")

Retrieved from "https://memory-alpha.fandom.com/wiki/Romulan_space?oldid=2470936"
Community content is available under CC-BY-NC unless otherwise noted.