Disruptors
For General Oh's unique warbird-designed flagship, please see Oh's warbird; for the smaller ship described as a warbird on The Ready Room that transported Narek to the Artifact, please see Romulan starship (2399).

The Romulan warbird was a type of warbird used by the Romulan Free State and the Tal Shiar during the late 24th century. These ships were decorated on the ventral hull with a painted bird-of-prey.

In 2399, these ships were seen flying around the Artifact, a Borg cube once belonging to the Collective. (PIC: "Absolute Candor", "Broken Pieces"). Later that year, 218 of these ships were part of a Zhat Vash-led Tal Shiar fleet heading to Coppelius on a mission to annihilate the synthetic lifeforms living there. (PIC: "Broken Pieces", "Et in Arcadia Ego, Part 1", "Et in Arcadia Ego, Part 2")

This type of vessel was identified as a warbird in dialogue. Star Trek Online refers to this as the Dia Vectau-class. 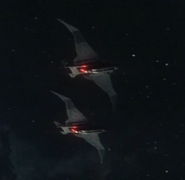